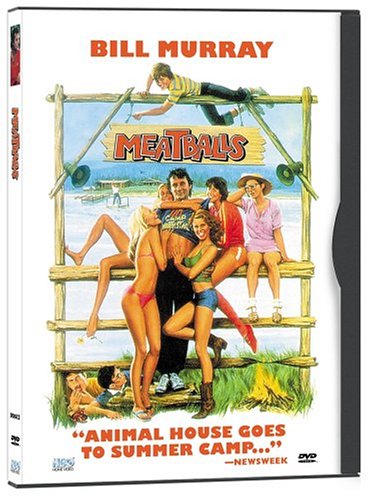 · Summer Camp highjinks centered around a camp counselor with a wacky sense of humor. He tries to help the campers have a good time. One camper named Rudy poses a particular challenge as he has a self-esteem problem

· With the popular hit ANIMAL HOUSE came the Canadian classic MEATBALLS. It’s Mr. Depresently Unpopular Rudy goes to summer camp full of rowdy teenagers. The head counselor is Tripper Harrison (played by Bill Murray), the prank pulling, girl seducing, fun lover, teasing both his boss and the counselors at the nearby rich kids camp. He and everyone else are sick and tired of always losing the Camp Olympics every year, Tripper must encourage all campers to try their hardest, and even convince young Rudy that this may be his chance to feel better about himself.

Easy summer fling,
Between Peter Sellers and Eddie Murphy, you have to mention Bill Murray when you talk about filmdom’s best comics. He doesn’t have the range or talent of either Sellers or Murphy, but Murray has better taste in scripts and a stronger core comedic persona, that being the flip, slightly askew, occasional drooly fellow who debuts here, in Murray’s first film.

“Meatballs” is not sophisticated, it plays to the conventions of its period with routine sex jokes and raunchiness that (for 1979) stays just where it needs to be to avoid an R rating, but it does amuse. There’s a dozen lines worth quoting as the film zips along, switching gears nicely from scene to scene. Brainless, yes, but not as stupid as “Stripes” or as boorishly snide as “Caddyshack.” Discarding the experimental “Where The Buffalo Roam” and “Tootsie,” where Murray’s role is minor, I’ll say “Meatballs” was not only a solid debut feature but Murray’s best film all the way through to “Ghostbusters.”

The best thing about “Meatballs” is it lets Murray be Murray, and he doesn’t disappoint, running the film from front to back with his goofy ramblings, even sticking himself into the soundtrack during the Olympiad sequence (where he can be heard scatting phrases like “communist nymphomania” and suchlike.) He has many killer moments, like his “just doesn’t matter” rant and his sideline pep talk during the basketball game. Even his tiniest asides are funny, even when they aren’t witty, because his delivery is so on. Obviously he had something to prove back then, and this film benefits a lot from that.

Would it be worth watching if Steve Guttenberg was playing Trip? I don’t know. “Meatballs” comes across at times as an ensemble film, but Murray has all the good lines, all but Fink’s earnest congratulations to Spaz (“you old make-out artist”) after Spaz holds a girl’s hand for a couple of minutes. Still, the rest of the cast has energy and play off each other well. I liked the little I saw of them. If they never had any recognizable post-film career outside Canada (i.e. no film career period), they display solid charisma. Perhaps director Ivan Reitman should have showcased them more, but credit him with getting an improvisational feel to their line readings atypical for this sort of film. Even the fact they’re not movie-star attractive isn’t a negative. You accept them as ordinary people, the kind you might enjoy spending a summer with.

The Rudy Gurnier subplot is odd. Maybe it’s just me, but Chris Makepeace, who looks like Karen Black mated with the guy who played Scorpio in “Dirty Harry,” gives off a too-creepy vibe. Even with that, his character might be worth more attention if the film wasn’t just about getting laughs. But he’s merely there to give Murray some time to develop his human side, and the touchy-feely subplot feels pasted on. Doesn’t Trip know giving a camper special attention like that will make him more of a target for cabin abuse?
Morty the camp director is annoying whether or not he’s the victim of ridiculous pranks, and the soundtrack tends to grate (though I think it’s supposed to, as with “Are You Ready For The Summer?”). But “Meatballs” is funny, and it deserves extra credit for being such a nice introduction to Bill Murray the movie star. Love those Hawaiian shirts, and his PA announcement helmet. And lines like his one about sending Mohawk kids off with $2,000 cash and a thermos of coffee for “Sexual Awareness Week.” Sometimes you just have to laugh.

Predictable summer camp comedy,
Completely ordinary movie about an exclusive camp called Camp Mohawk. The program director Tripper Harrison (Bill Murray) provides most of the “comedy” as we see predictable PG rated shenanigans of the kids. We also get two violent, unfunny and stupid games with rival camps. To make it worse they throw in yawningly predictable romances and Murray helping a young kid (Chris Makepeace) come out of his shell.

For some reason this was a huge hit and made Murray a star. I can’t see why–I didn’t even smile, let alone laugh, once. None of the bits are funny–just boring or raunchy (in a PG way). Murray’s pronouncements over the camp’s loudspeaker are eye-rollingly bad. In fact I never liked Murray. He’s just not funny! This isn’t a total washout. It was well-done and the acting (Murray aside) was pretty good. Kate Lynch especially was good. Also the good song played at the camp social–“Makin’ It”–was later used as the theme song of a similar named TV series. For this I give it a 3 but it just wasn’t funny at all.

If you like Murray you probably will like this. If not, stay away. Give me “Little Darlings” over this any day.