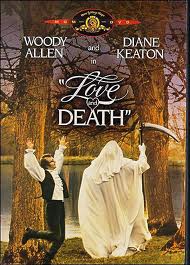 One of Allen’s best,

Hysterical spoof on Tolsty, the Russian Revolution and Russian literature (with Igmar Bergman thrown in!). Movie has Allen as a Russian man (!!!) who is a coward (of course) and is sent off to fight in the revolution. He also falls in love with Diane Keaton who only loves him as a friend.

The film looks incredible–beautiful, lush settings and some truly beautiful costumes–I’ve never seen another Allen film that looks this good. Also a wonderful music score that totally fits the picture. I believe this is probably the first (and only) Allen film with not one shot in NYC (it was filmed on location in Hungary).

The film is side-splitting–the jokes fly fast and furious and there are many more hits than misses and the film moves at lightning speed. There are way too many highlights to mention, but my particular favorites are the Keaton/Allen intellectual discussions and Jessica Harper (looking fantastic) giving a very funny monologue at the end.