Let It Be – 1970
an intimate bioscopic experience with THE BEATLES 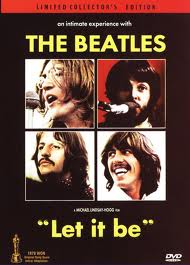 Plot:
· A documentary showing both how the Beatles made music together, and how they split up. Hundreds of hours of raw footage was condensed into the final product. The rooftop performance ending the film remains a rock-n-roll archetype.

Why Paul Was The Coolest Beatle,
It’s fitting that the film opens with a shot of the drumstand logo ‘The Beatles’ set slightly askew. We then see the same logo lifted up and set atop a canvas-covered piano by a roadie, Mal Evans. The room is dark and hushed, and Mal and a single helper are the only people in sight, as if the Beatles already broke up 15 minutes before the movie began. What we are about to witness, apparently, is not a rock band but a museum exhibit.

But wait! The Fabs are still together…albeit barely. “Let It Be” catalogues the disintegration of the world’s most famous rock band. It’s true they kept playing for nearly 12 months after they were filmed making this rockumentary, and did better work, too, but you can see the clock ticking.

The good thing about this movie is you feel like someone floating in the wings while the dynamic foursome try to figure out their newest set of songs and whether they are any good. Some of them, like “The Long And Winding Road,” “I Me Mine,” “Get Back,” “Two Of Us,” and the title song, are not just good but enduring classics, though they would need some sweetening at the producer’s console to achieve their final form. You hear the Beatles candidly chat with each other and the others hanging around the recording sessions. For Beatles fans, this is vital material, and you are well advised to hang on through to the rooftop sequence that ends the picture, not because it is the best thing in the movie (it is, but the band is flat and the show was over too quickly) but because you do get a feeling of the world’s greatest band ever kicking out the jams and rediscovering a fragment of their greatness for the sake of a lunchtime crowd in London’s trendy Savile Row (as a vicar says when asked by someone with a camera: “It’s nice to get something for free in this country.”)

The bad news is at least three of the four principal players in this drama seem to mind you floating in the wings and wish you’d go away. John, Ringo, and especially George were stressed out at the presence of the cameras and stare at the lenses with a mordant, frumpy cast. You can’t blame them because the band (or at least the three of them) had little in the way of apparent material to offer. But you wait in vain for them to sort things out and become the band they really were in the recording studio. They never emerge from their funks, and “Let It Be” never quite becomes a good movie because of it.

The fourth band member is a different story. Paul McCartney was the guy who put the cameras in Twickenham and Apple Studios. “Let It Be” was his brainchild, and it shows. While the others snub the lens, Paul catches your eye with a lingering look that reads: “Where were you? I’ve been waiting all morning for you to show up. Look what I’ve come up for you on the piano. You like it?” Paul’s inviting gaze and pleasing personality go a long way to make “Let It Be” endurable. You come to seek him out in every frame. But unless you are a fan, of Paul and/or the Beatles, it’s not enough to make it worthwhile.

I am a Paul and Beatles fan. So what do I enjoy? The quick-tempo version of “Two Of Us” with Paul and John scat-singing face-to-face, snarling Presley-like at each other for easy laughs while John’s girlfriend Yoko Ono sulks on the sidelines. The account Paul gives of watching footage from the group’s then-recent visit to Rishikesh, India and the Maharishi Mahesh Yogi, how he watched John board a helicopter with the “holy” man and remembered John later explaining he wanted to see if Yogi would “slip you the answer” en route, is exactly how Paul describes it later on the Beatles’ Anthology, except in “Let It Be” you get to see him telling this anecdote to John directly. I even like the rooftop sequence. It’s overrated as a performance; the band is out of tune even with talented keyboardist Billy Preston offering some needed life support. Even many people who like “Let It Be” the album won’t like this section, which is only the best part of the movie. As I said, you have to be a Beatles fan to want to see “Let It Be,” but like a JFK admirer watching the Zapruder film, saying you’ll enjoy it is another matter.

The two best things about this movie, for the casual fan: One is you get to see how much of a drag it is to record music in a studio, even eventual rock standards. Two is you discover the genesis of the verb ‘To Yoko,’ meaning ‘to totally conform your significant other to your thinking, alienating him/her (usually him) from any previous personal association in the process.’ If you slow this film down slowly enough, you can literally see John’s inner being sucked out of his head.

But for great Beatles music, go elsewhere. This is sociology, not entertainment.