Island of the Fishmen 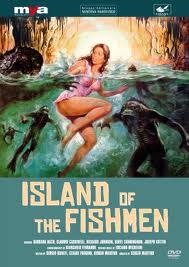 The Fishmen Rule!!!
Sure, most people will designate “Island of the Fishmen” as silly and trashy hokum, but can you honestly name one other movie that brings forward THIS many exhilarating themes? This Italian gem stands for pure entertainment and features stuff like voodoo, volcanic eruptions, mutant fish-creatures, the mysterious continent of Atlantis, treasure-hunting, a remote island filled with death traps and utterly mad scientists! All this and much more in one simple movie? Yes, please!

Close-minded opponents of Italian horror cinema can easily tag this film as a cheap exploitation version of “The Island of Dr. Moreau”, but the truth is that this is so much more! “Island of the Fishmen” delivers thrills and adventure from start to finish with surprisingly convincing special effects and astonishingly stylish camera-work.

The story promisingly opens with a small group of prisoners, survivors of a shipwreck, washing ashore a tropical island. They encounter the sadistic Edmond Rackham who rules over a native tribe…and a legion of genetically created amphibian monsters that live in the island’s swamps. There are so many twists and additional sub-plots in the story that it’s almost impossible to write a summary but, trust me, this gem is worth checking out.

Sergio Martino once again proves that he’s an ingenious filmmaker who has the talent to be commercial-minded and creative at the same time. He makes great use of the beautiful island location and also the interior sets look very impressive. The staggering underwater footage and imaginative scenery really lift this film high above the normal standards of late 70’s exploitation.

I don’t quite understand why Roger Corman reworked the original so much and released it on the American market under a different title (“Screamers”), because there are very few elements open for improvement. The cast members are all Sergio Martino regulars (with the exception of the great Joseph Cotton is a neat supportive rule) and give away great performances.

In case you can get your hands on the recently restored German version, you’re treated to fifteen uncut minutes of extra action.