Holiday on the Buses 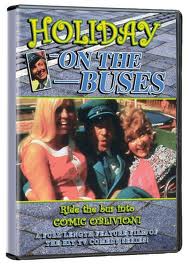 Dirty Old Men,
The problem this film has is the same problem the TV series had and that’s the laddish Stan and Jack. There’s nothing wrong with laddish characters but actors who seem to be in their late 40s/ early 50s play Stan and Jack! And there’s something objectionable – not to mention credibility defying – as they cop off with girls young enough to be their daughters

As for the rest of HOLIDAY ON THE BUSES, I found it instantly forgettable. It’s basically a 30 minute episode spun out to 90 minutes with having all the action take place at a holiday camp instead of a bus station