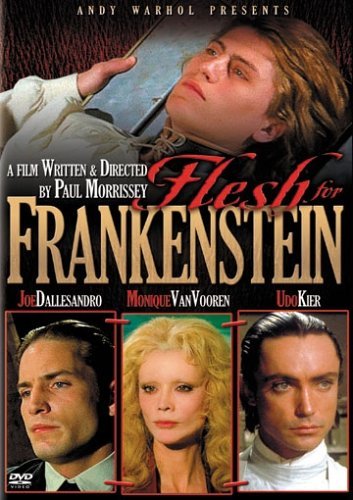 One Star For Joe, One Star For The Lizard,
Also known as ANDY WARHOL’S FRANKENSTEIN or ANDY WARHOL PRESENTS FRANKENSTEIN, this early 1970s film is associated with Warhol only in the sense that the pop artist put up the money for the project and because it featured several actors–particularly Joe Dallesandro–who had appeared in various Warhol “factory” films. The film is a calculated effort to create a cult film, even down to deliberate courting of the X rating it received at the time of its release.

The Baron Frankenstein (Udo Kier) is married to Baroness Katrin (Monique van Vooren); they have two children and reside in the obligatory isolated castle complete with secret laboratory, where Frankenstein and his assistant (Arno Juerging) conduct their work. In this particular case, they seek to create both a male and female “monster” for breeding purposes. Unfortunately, when Frankenstein collects a shepherd’s head for his male monster, he runs afoul of the shepherd’s friend Nicholas (Joe Dallesandro.)

The film gives every character a far-out sexual spin. The Baron and Baroness are actually brother and sister and their children are not only the result of their incestuous relationship, they themselves give every appearance of following in the family tradition. The Baron’s sex life consists of unfastening the stitches of his female monster and… ahem… shall we say enjoying the pleasures of her internal organs; sexually abandoned by her husband-brother, the Baroness takes lovers (and they are spied upon by the children)–and then decides she wants to fool around the male monster. The lab assistant wants to imitate the Baron’s explorations of the female monster; Nicholas rolls around naked with every woman in the village. And so on.

Sick, stupid, FUN,
Udo Kier plays Baron Frankenstein who makes beautiful male and female monsters. He wants them to mate but the male monster has the head of a man who wanted to become a priest…so he can’t “perform”! I’m not kidding–that’s the plot! I saw this when it was released in theatres in 3-D back in the early 80s. It was the R rated version (they said). Turns out it was the X rated version! Quite interesting. The story is stupid, the dubbing atrocious but the movie is so over the top (in acting and plot) it’s plenty of fun!

In 3-D (which was excellent) you have every disgusting thing you can think of thrust in your face. Rats, a severed head, intestines, a human heart at the end of a spear, etc. etc. It’s not disgusting, just silly. And the movie was so stupid you just kept watching in amazement to see how bad it was going to get. My favorite line is when the Countess is woken up from a deep sleep and screams “How dare you wake me up! You know I have insomnia.” (!!!)

A laugh a minute in this one. Too bad all the 3-D prints seem to be gone–it was LOTS of fun that way.