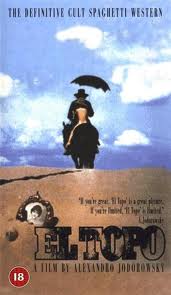 I just saw it! I finally saw El Topo!,

This film has been #1 on my must-see list for years now, and I never expected it to happen. Lo and behold, I found a copy of it on VHS at my local kick-butt video store. Apparently there’s a company somewhere that copies the Japanese LD onto tape and sells them. The version, then, that I saw is in full-screen format, dubbed into English, and with Japanese subtitles at the bottom of the screen. Plus, the quality was not great. However, it wasn’t too bad and I’m just glad that I’ve finally seen it. Now I can hope for the death of Allen Klein and thus the release of it and Holy Mountain, which the prick also owns, onto DVD (and/or VHS), but it’s not as urgent anymore.

So how did I like it? Well, with the kinds of expectations and imaginations that have been built up in my mind since I first heard of it, right after I first discovered Santa Sangre, it could really only be disappointing. And it is. It’s still a great film, one of the more fantastic I’ve seen. The story is kind of random, and the attempts at allegory are often goofy. It’s major success is the beauty of the imagery. It also evokes a mighty powerful mood. I myself think Santa Sangre is a much better film, but El Topo is quite an experience itself.