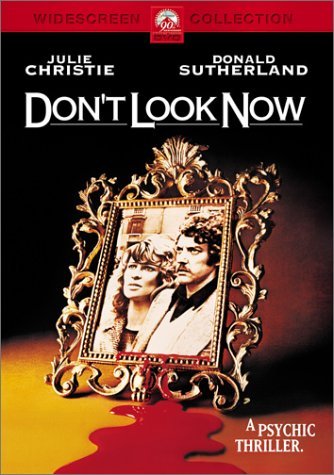 SUPERnatural!,
First establishment: don’t even consider watching this film when you’re tired and/or trying to conquer sleep…because you’ll lose. The terror in Don’t Look Now is strictly psychological and whether it’s a masterpiece or not all depends on the viewer’s state of mind. It could become one of the most superbly chilling films you’ll ever see, but at the same time you could say it’s very overrated and not that compelling at all.

Second establishment: the settings, scenery and locations couldn’t possibly be better. Don’t Look Now is almost entirely set in Venice, Italy which is the most appropriate décor to tell a paranormal tale. The story completely depends on the dark alleys, ancients cathedrals and typical waters where it’s shot at. Donald Sutherland and his wife Julie Christie settled in Venice to slowly forget the death of their young daughter. While Sutherland is restoring a cathedral, his wife is approached by a blind, psychic lady who claims to be in contact with the couple deceased daughter. This spiritual woman comes with a warning…but she can only foresee a tragedy…not forestall it! Nicolas Roeg is a brilliant cinematographer and he can create a hardly bearable tension without showing shocking images.

The drama and sentiment in Don’t Look Now is well-represented, of course, since it handles about the worst thing parents can go through. Witnessing and living with the death of their own child. The supernatural methods that Roeg implements are unique and it’s almost impossible to discover them all in one single viewing. Perfect example of that is Sutherlands walk in the dark alley, where all the ominous elements of the little girl’s death are repeated. That’s pretty brilliant but you don’t realize it right away.

Some of the storytelling require a wide attention-span and I’ll fairly admit that the film is overall long and pretty boring at times. Even the explicit (and infamous) sex sequence is way too long. Donald Sutherland is a class A actor, even though his haircut never looked so ridiculous. Julie Christie is a loveable wife and very convincing as the heart-broken mother.