Dirty Harry (1971)
You don’t assign him to murder cases, You just turn him loose 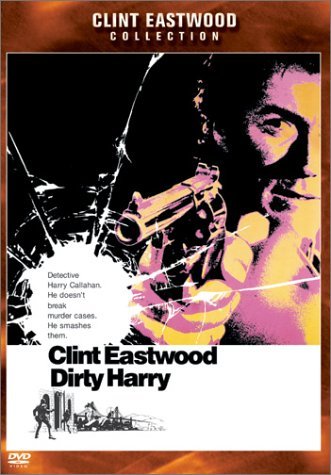 Well do you feel lucky punk? do ya?
What HALLOWEEN did for slasher movies so many years later, DIRTY HARRY did for the committed cop! As someone quite correctly pointed out, where do you think Martin Riggs (Lethal Weapon) came from?

DIRTY HARRY started it all and was unapproachably the best of the series. It had two things going for it…three, if you count Clint Eastwood. Direction by the brilliant Don Siegel who had already steered Eastwood through COOGAN’S BLUFF (who WAS of course he ancestor of DIRTY HARRY anyway) and a blinder of a performance by Andy Robinson as the Zodiac killer – absolute evil personified and as despicable a bad guy as has ever been thrown up on screen since.

Audiences in 1971 had never seen violence so up-close and personal…Harry was the way…the future, the solution to all our doubts and antagonisms towards Vietnam. One of the most successful films of the period, Eastwood never looked back or ever topped this particular performance.

The language and violence was jaw-dropping stuff In ’71 (the only other film doing the “R” certificate rounds was Michael Caine’s GET ARTER!) Siegel’s direction was tight, the script – tighter and the box office receipts world wide, on fire! If you have never seen DIRTY HARRY you have missed an integral part of American film history!

“Go ahead, make my day”
It’s interesting seeing Dirty Harry for the first time, since I expected to hear that catch phrase over and over again. I only heard it twice and both were well merited- the first is said to a caught bankrobber and it’s spoken like it’s right out of the script, direct. The second comes near the end when Harry finally has his culprit cornered, and all the rage and fury is revealed, which made me want to cheer even though I was watching it by myself.

Dirty Harry is one of the best and indeed grittiest action films from the 70’s, possibly from the 20th century, and it makes Clint Eastwood’s Dirty Harry into a star by making such an anti-hero witty and likeable, sort of in a sense like an avenging, cop version of McDowell’s character in Clockwork Orange (both released in 1971).

In this first installment of the “Callahan” movies, Harry is brought on the case of the zodiac killer (Andrew Robinson), and is given a new partner, which Harry can’t stand, and as the events unfold he knows he has to get him.

Robinson is perfectly cast as the killer, with his scene on the bus ranking as one of the more terrifying, visceral scenes in the movies.

Very 70’s, but it’s hard-boiled status can’t be denied for Clint buffs. A+