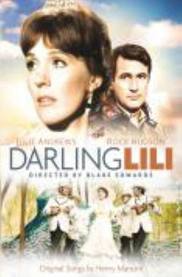 Fun, entertaining movie about WWII German spy (Julie Andrews!) falling in love with American pilot (Rock Hudson), while trying to get secrets from him. For some reason this was attacked by critics and shunned by the public in 1970–I can’t see why. It’s beautifully shot, has wonderful costumes and interiors, and exciting aerial dogfights. Also it has Andrews doing a strip-tease (strictly PG material) and singing a beautiful song–“Whistling in the Dark”.

The movie does have problems. Andrews and Hudson did not get along during the shooting of this–and it shows. Their love scenes lack spark and they have zero sexual chemistry. Still, they turn in OK performances. The film is a little long (even in the 105 min director’s cut I saw) and gets way too dark and serious at the end.

Still, worth catching. Try seeing the directors cut…the other one runs half an hour longer!