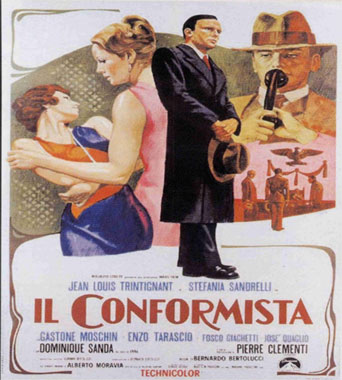 Conformista, Il (1970)
One of the best films of 1970,
It’s a fascinating blend of tense character study, torn love story, and a background loaded with subtext and history that writer/director Bernardo Bertolucci brings with The Conformist. But through the entire length of the film, even if you’re not totally vested in interest in the main character (who, indeed, is meant by design not to be a ‘likeable’ protagonist), the look of the film, its sweep and style and what most great movies do- sucking you in on the side of composition, mood, and music- is worth recommending.
The film stars Jean-Louis Trintignant, an actor with a cool exterior but something very uneasy underneath the surface in almost all of his scenes (which perfectly suits the character he plays). Based on Alberto Moravia’s novel of the same name, Marcello Clerici is a fascist, or at least part of the fascist ‘clique’ of sorts in late 1930’s Italy. He’s a secret officer who gets assignments to track people down and either kill, or collaborate as it were. He has some skeletons in his closet, to be sure, and in one of the most striking and powerful scenes of the film, he recalls a particular incident in his youth that stayed with him, if only in the back of his mind (I won’t reveal it, but it comes as something of a shock, not so much in its outcome, but how Bertolucci approaches directing the scene with the Chauffeur and the kid).

Going along with this sort of ‘clique’ that Marcello sticks in, he has a young wife, who loves him but is not really his equal on any sort of intellectual or even emotional basis. The actress playing her, Stefania Sandrelli, conveys this mostly ‘ignorance is bliss’ attitude that helps the film allow some lighter-than-air moments (i.e. the ‘Dance of the Blind’ sequence, a masterstroke to be sure). For some reason or another, which does become more obvious as the story goes along (and ties into this non-linear structure Bertolucci works with intelligently), Marcello seeks out and visits his old Professor, an anti-fascist, and his beauty of a wife, whom he becomes somehow smitten with (the two character actors in the parts, Enzo Tarascio and Dominique Sanda respectively, hit all the right notes, even with the subtext of scenes).

After the sort of climax to all this, we move ahead several years later, when Mussollini is gone from power, and there is one last scene with Marcello that really made me sit up and take notice. I’m sure Bertolucci was fairly faithful to the original text (having not read it I can’t say for certain), but he keeps a challenging ending for the audience- a lessor filmmaker might have Marcello come to some kind of clean-cut catharsis in the wake of the end of fascism. Bertolucci doesn’t have that, and he and Trintignant keep it true to the character and his personality, which sort of brings to a head not so much a story resolution, but just one of something simpler about society- what does this sort of upper-class conditioning do to a person after a while, especially if there is this certain level of detachment that Marcello has. In the end, he’s truer to the film’s title than anything of his own real ‘beliefs’.
But going aside from the solid philosophical &/or political debate that could go on from the themes raised in the film, going back to the pure film-making aspect of The Conformist, one can sort of sense this as being like a ‘test-run’ of sorts for Bertolucci to work solely with the masterful Italian cinematographer Vittorio Storaro (of Apocalypse Now fame) for their following masterpiece, Last Tango in Paris.

In some small ways, at least for Storaro, The Conformist paints even richer details and strokes of light and dark and shadow than in Last Tango. And the two have a sense of not sticking directly to one set way of filming either, which is very good. There will be a scene like when Marcello and the Professor are talking in the Professor’s office, and Marcello pulls the shades down completely on one window and leaving the other open. This creates a stark, almost baroque contrast between the two of them that works well just for mood if nothing else.
Then there is also the factor of how Bertolucci gets his camera moving, often in urges that would seem unnecessary or too ‘artsy’ for other filmmakers- the dance scene, for example, brings a viewer to move with the dancers, but ever so slightly, and then the frame is filled with these moving bodies and it’s a truly virtuoso sequence. Even a scene that might be fairly standard for say an action film director, when the chase through the snow covered forest happens, the use of the hand-held camera isn’t going too cheesy- if anything it really heightens all the tension that has been building since the start of the film (most of the time the camera’s on dolly tracks or some other form, then it switches and it adds a different sort of intensity to the proceedings). Although Bertolucci and Storaro won awards from the National Society of Film Critics, I see it as a fairly big snub on the Academy’s part to not have given Storaro a nomination.

On top of that, there’s other factors that add to the collaborative effort of Bertolucci’s success: there’s the emotionally excellent Georges Delerue score, and Ferdinando Scarfiotti’s cool production design (later also a production designer on Last Tango). In the end, along with the technical side, it’s also the story, and the character(s), that add to the appeal of the Conformist. It’s a lot to take in on a first viewing, but it doesn’t disappoint for the fan expecting good things from the young Bertolucci.

Just simply a masterpiece,
Story of a weak-willed Italian man (Jean-Louis Trintignant) who is ordered, in 1938, to assassinate his one-time professor. He is ordered by a Fascist organization he joined to become normal, to conform (he’s gay and ashamed of it). He takes his annoying wife (Stefania Sandrelli) with him…only to find his professor has married a former love of his (Dominique Sanda). Can he kill them both? This film is just riveting. The story is never boring and full of some very intriguing people. The acting is superb–especially by Trintignant who you see holding his fear and indecision inside and Sanda who is unbelievably sexy…and dangerous. I don’t know much about politics so I’m not going to discuss that.

But this film is a must-see for the incredible cinematography by Vittorio Storano and masterful direction by Bernardo Bertolucci. The sets are exquisite–every single one looks incredible and is beautifully lit and shot for maximum impact. Sometimes I was just so caught up in the visuals I lost track of the story! Every shot is filled with rich symbolism. My favorite sequence was at a dance hall when Trintignant is “caught” in the dance. Also some prints are missing a 10 minute “Dance of the Blind” that was cut from original prints. It’s no loss–it adds nothing to the story.

Quite simply one of the most beautiful films I’ve ever seen with a strong, intriguing plot. A powerful must-see film. A 10 all the way.