Boxcar Bertha – 1972
America in the 30’s was a Free Country. Bertha was jes’ a little bit free’er than most. 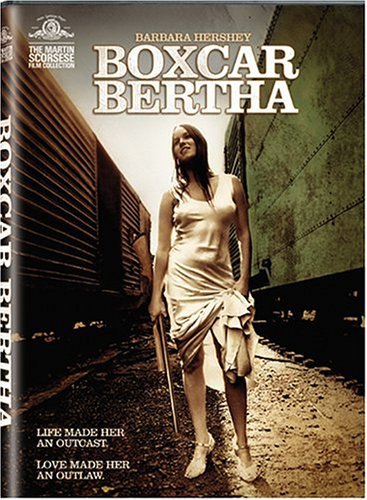 Boxcar Bertha (1972)
Scorsese’s second,
Martin Scorsese got hired by Roger Corman, I presume, to make this “based on true story” movie of a boxcar thief and robber named Bertha whom with some other robbers stole their way into a small piece in history but got into strife towards the end. It isn’t one of his best pictures since he really was just the director and the script and the actors did more work than he needed to do on the picture.Like The Color of Money, it’s a film that if he didn’t direct it it wouldn’t of made much of a difference in the outcome.

Still, give credit where credit is due, and those (very few I might think) that heard what Cassavettes said to Scoresese after the 70s movie got released (he told Marty that it was a piece of s*** and to work on something better- which he did with Mean Streets) should disregard it.

Overall, Boxcar Bertha is a watchable and good piece of cinema with some decent performances and an overall feel that works in it’s “tradition of Bonnie & Clyde” genre. Hershey and Carradine are also good. Just don’t expect anything ground-breaking, unlike the next 5 out of 6 movies Scorsese would make in the next eight years after this. B+