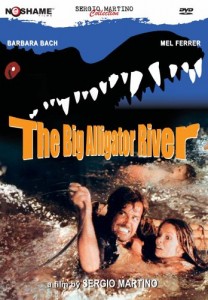 River of the Alligator God,

Much more than the obvious Italian Jaws rip-off this appears to be, “Big Alligator River” is like a well-scripted and ambitious jungle-exploitation classic. This seventies film was directed by Sergio Martino – an eminent filmmaker in the Italian horror field – and on many different levels it’s almost like a sequel to his earlier triumph “Mountain of the Cannibal God”. That particular movie mainly draws your attention by mentioning a gruesome cannibal-tribe, but the essence of the story handled about anthropology and learning to understand the curious religions a certain primitive tribes. “Big Alligator River” is exactly like that! There naturally is a giant alligator swimming around, devouring people, but I really defend that the actual emphasis of Martino’s seventies film lies on the African tribe members who believe that this animal represents the wrath of a native God.

According the beliefs of this tribe, the Alligator-God is furious because a Western businessman built a tourist complex, neglecting the environment and recruiting the natives as slaves. Almost immediately after the arrival of a first group of wealthy tourists, both the alligator and the war-hungry tribe start a bloody killing spree. Surely, I can’t deny that “Big Alligator River” cashes in on the huge success of Steven Spielberg’s creature-feature milestone “Jaws” a great deal. Particularly the character of Joshua, who owns the resort and ignores all the warnings about the dangerous presence of the alligator in order not to disturb his clients, is an exact copy of the hypocrite mayor in Spielberg’s movie. There are some more obvious influences of other 70s horror movies in the script but, overall, “Big Alligator River” is a solid independent film with a fair amount of suspense, gore and admirable camera-work. Despite the fact that the DVD-cover shows a totally naked woman being eaten by the croc, the film contains few sleaze or gratuitous sex. The filming style is elegant and Martino’s camera has more eye for the African wildlife than for the ravishing bodies of the female stars.

Judging by the other user-comments around here, I seem to be the only one who thinks that the giant alligator looks rather convincing (especially considering the budget of this type of movies) and especially the many close-ups of his pupils come across as quite frightening. The acting is very satisfying and, naturally, Barbara Bach’s good looks are a treat for the eyes. “Big Alligator River” is warmly recommended to fans of Italian horror.