Beware of a Holy Whore 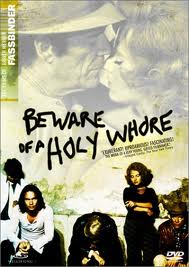 Watch for the jokes on Last Year at Marienbad,

Fassbinder’s wry comedy about the trials and tribulations of filmmaking. It’s gorgeously shot and very well acted (especially by Fassbinder himself and Lou Castel, who plays the director), but, truth be told, a bit on the dull side.

I guess most of Fassbinder’s early films are a little dull. Only fans will want to pursue them. There is plenty to like, though. The best element of the film seems to be lost on all those whose reviews I’ve read.

The film is set mostly in an opulent Spanish hotel, and, at least for one sequence, it lapses into a deft parody of Resnais’ Last Year at Marienbad. I think that, if I tried to describe it, my explanation would be too wordy and would not convey it well enough.

So, if you ever do happen to watch the film, make sure to keep an eye out for that joke. 7/10.