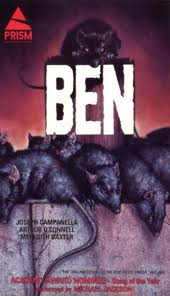 Review by Sven Soetemans
Disney in the sewers,

I haven’t encountered many people who agree with me so far, but I thought the seventies film Willard was a deliciously grim and underrated horror gem. It handled about an extremely introvert adolescent whose only friends were a bunch of rats he could communicate with. The more recent remake starring Crispin Glover is worth a look as well. That’s why I was glad that I found myself a copy of this ‘Ben’, the quickly produced sequel to ‘Willard’. The seventies film starts where Willard left off and wonder-rodent Ben finds a new human friend. A young boy with a heart condition takes Ben in and sings him songs. Nonetheless, Ben and his thousand of followers need food and the constantly increasing rat-plague terrorizes the neighborhood.

This sequel isn’t half as unsettling as Willard and it’s merely driven by sentiment. The poor boy’s heart condition is shamelessly exploited and the whole ‘nature versus man’ fable isn’t very convincing. The friendship between boy and rat is pictured like some kind of Disney fairy-tale. The rodent saves the boy from bullies and even shows him around in the sewers. Ben may easily be skipped…it has very few excitement and hardly any memorable moments. I guess the only winner here is Michael Jackson who had scored a monsterhit with the title song.

Lucky for him, most people don’t even know he’s singing about a rat.