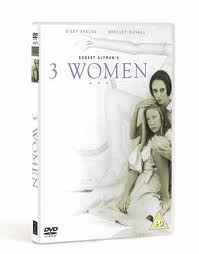 Three Women is an utterly fascinating film, and, by my calculations, is Altman’s second best after Nashville, which few films can beat. However, whereas I am so familiar with Nashville that I am actually arrogant enough to believe I can understand it, Three Women does not inspire that sort of confidence in me. I have no clue what exactly it is about.

Basically, it is one of those movies where a woman, Pinky, admires her roommate Millie so much that she wishes to emulate her in every way, apparently even trying to steal her identity. In doing so, she freaks her roommate out, as can certainly be expected. She also freaks the audience out. It isn’t all just a bunch of shivering, though. This movie contains a lot of humor which can only be called `Altmanesque.’ The great irony is that Pinky’s object of admire is nothing but a bag of hot air. Millie is such a loser. At the film’s opening, she is training Pinky for her new job at the nursing home. To any normal person, two weeks into the job, you’d be amazed at how much a moron the person is who showed you the ropes. She brags about men whom she rejects, but all the hot dates she claims to be going on never come to fruition. Millie also overreacts to Pinky’s actions, yelling at her for very petty transgressions. When Millie does something that is grossly irrepsonsible and morally wrong, she attacks Pinky for judging those actions. Meanwhile, Pinky is creepily reciting passages from Millie’s diary with the passion of a high school drama student.

Taking Ingmar Bergman’s Persona as its major inspiration, around halfway through the film, after Pinky has an accident and goes into a coma, the two women begin to switch roles. Millie becomes the passive and protective roommate while Pinky becomes the aggressive vixen. Actually, Pinky becomes the mythic version of Millie.

But I have purposely left out the third woman of the title. I really am not sure about her, or the climax and the ending, in which she plays a major part. Her name is Willie, a pregnant woman married to a man named Edgar (who will, through the course of the film, also sleep with both Millie and Pinky). They run a bar where Millie likes to hang out, and they also live in the same apartment complex as Millie and Pinky. Edgar is an outgoing joker, and has no problem sleeping around on his wife. Willie is mostly silent, which is why she is easy to forget in the proceedings. She paints in a Native American style all over the bar and the apartment complex. She does so seemingly because she is compelled to. She despises complements about them. Throughout the film, her paintings comment on the situation between Millie and Pinky (they’re used in a masterful fashion, but the pan-and-scan version that I saw on TV (it was also edited for time and content, dag nabbit) screws this up a bit). I don’t know if she serves much more of a purpose than that for most of the film.

It is the ending which is especially peculiar, and it also most effectively channels Persona. Pinky has convinced Millie that she ought to have their apartment’s master bedroom to herself (and Millie ought to sleep in the living room). Pinky has a surreal dream, which is punctuated by the camera’s filming through a fish tank whose blue waters are undulating like a snake, in which she goes through the events of the past few months. She becomes frightened, and, much as Elisabeth Volger does in Persona, she wanders into Millie’s bedroom. Here, though, she wakes Millie up, asking if she would mind sharing a bed tonight. As they try to sleep, Edgar wanders into their apartment, drunk off his rocker and spouting that Willie is giving birth all alone. Millie and Pinky race to her side. Millie tells Pinky to drive away and fetch a doctor, while she herself helps Willie deliver the child. Pinky, fascinated or frightened (she had earlier expressed fear about being pregnant herself), just stands there and stares. When the child is born, it is still. Willie cries in her bed, and Millie smacks Pinky for not getting a doctor.

The next scene takes place at a restaurant where Pinky is apparently a waitress. She bizarrely refers to Millie as her mother. We find out that Edgar accidentally killed himself with his gun, but the audience suspects differently (all three women had individual scenes where they shot at targets at the bar; they also all have reason to despise him). Millie and Pinky then leave the restaurant and walk back to their house, where Willie sits on a porch swing. Pinky talks to her as if they were sisters. They appear to be living together as a family.

Who else could end a film like that besides Altman? I’ve only lately come to notice this, but his endings are always enormously original. I just lately saw his latest film, Dr. T and the Women, which many people hated because of the ending. I cringe imagining what they would do with this one. If anyone has any ideas, please contact me. I will have to watch it again. Perhaps soon they will release it on DVD where I can watch it in its true form. 10/10.

PS: I need to know whether the ending that I saw was the actual ending. My tape cut out right as Millie said to Pinky: `You know where my sewing kit is.’ I’ve seen plenty of films, and this seemed to me like the camera was zooming out and the credits would probably role any second.