If you didn’t have a sloppy mum like Dodge, or your old man didn’t work in the chip shop like Daz and Skinny’s, then getting out on a mid-winter evening took all the cunning the Cows Gate Gang could muster.  Milky White of course was free to Hush Puppy as he pleased in the dark, only he preferred to stay indoors doing his science homework or banging his triangle.  Wormhole had to stay in the warm if there was a mist, apparently, because it rusted the metal plate in his head.  There was a collection box for him down at the chapel so the Wormholes could send him to a private garage to have it galvanized.

Then Daz said he saw Milky a couple of times coming home from the library in the dark at 6.30.

-Yeah, Daz said. ‘F your old woman won’t let you out to play, then join the library.  Then, right, just say you ‘ave to take ‘em back or Ena Sharples’ll fine yer.

It was alright for Daz.  His mum sent him up the chipshop every night to fetch their suppers and Skinny went to help him carry it.  Dodge was out ferretting with his dad or doing rag & bone.  But me, I was a caged under the « we-want-you-where-we-can-see-you » principle.  Dark is dark, and in the dark boys get up to mullarky.  So I joined the library, and the cage door opened one night a week.

The problem was what to do with the books.  Obviously we couldn’t read them.  Ena Sharples didn’t expect me to either.

-You ! she said when I walked in.  This isn’t the chip shop, Cedric.  It’s a public library.

The library was in the old fire station so it was only as big as a village fire-engine.  Ena Sharples was at a desk in the middle where once there’d have been a pool of oil and sawdust.  Right place for her too, face like that.  Her James was at the grammar school so she looked at me like the firemens’ pole was still stuck up her nose.

Daz was waiting outside.

-Yeah yeah, I got us one each.

-I’m gonna look at that one.  It’s Jack Hargreaves.  ‘S got fishin’ pictures in it.  The other two’s for…you know what.

We got to the top of the concrete slope.  I handed Daz his book, the second biggest in the library, a good 2ft square : Ships of the World.  Mine was even bigger : Greeks and Trojans.  Conditions were good.   A light frost on the nobbly concrete, a chill mist muffling the streetlamps.  We put the books on the ground, spine forwards and sat on them, tucking our fingers under the flaps.  The first couple of yards we were like dogs with itchy bums, scooting ourselves along with our heels till we hit the frost and down we went on our bobsleigh books, grinding to a halt on the pavement grit at the bottom, bobble hats askew.

We were making our way back up the slope for a second run when Milky White came out of his backdoor and started making his way up the cinder path.

-Let him, Daz said, always the realist.  She’ll find out anyway, the state of this book.

He held up his Ships of the World.  Looked like Shipwrecks of the World now, great big graze down to the bare cardboard underneath.  I was thinking I had two weeks to fix it with, I don’t know, some paint, or I could stick on another picture, when this voice came down the drainpipe.  Well, it came from above, the open window of the nearest house, Milky’s neighbour : 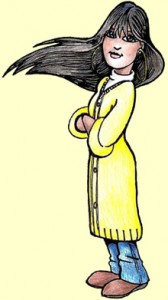 Daz was quick, gabbed at the speed of sound Daz did :

-You’re mouth’s so big Muttley, I’m surprised you can even get in your bedroom.

It was Muttley Murphey.  And wherever Muttley was, Toothpaste Gibbs was sure to be.  Sure enough, she opened wide :

I don’t know what it was about those two, but wherever the Cow’s Gate Gang went, Toothpaste & Muttley seemed to be already there.  What were they doing?  They were never playing girls games, just chewing on the spot, leaning against walls and staring.  Now and then they came out with bits of song just to mock the gang, then they’d crack up laughing.  Toothpaste once had all the boys on bikes in the village follow her as she did a ride through in blue eye shadow and her mum’s gold earrings.  Her long black hair was always stuck in her eyes and on the greasy side.  She wore long cardigans down to her knees and called all boys “buster”.  We never admitted it, but we’d have all been in love with her if it weren’t for Muttley.

Muttley was her inseperable “guard dog”, tall and lankey with six brothers.  Muttley wore her hair in a bun like her mum and her great baggy dungarees made her look like her old man.  She thought she was special just because she lived next door to Milky White, but he called them the Steptoes, and Muttley the « Nag ».  We couldn’t get near them for lip, and they both ran like the clappers anyway.

Just then, Milky appears at the end of his path with a duffle bag his mum had embroidered « library books » on.

-Look at ‘im, Daz said.  Taking his books up the laundrette first.

-The Whites’ve got a washing machine, Muttley said.  I can see your mum aint even if yer name is a packet o’ soap powder.

-What’s that make ‘im then, White Spirit ? I said thumbing at Milky who was passing under the streetlamp like the only boy in the world.

-I’ll tell you two what that makes ‘im…

And that’s when she dropped her bombshell.