The Last of the Baskets 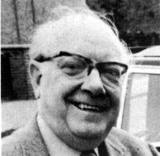 Produced by Granada TV for the ITV network, starring the man that was already on the BBC in Dads Army, and often still appearing in Coronation Street at the same time. Arthur Lowe played the butler to a man that has inherited a great house.