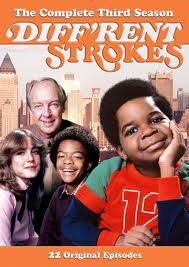 Diff’rent Strokes was and still is regarded by many as not just one of the most successful sitcoms in TV history but one of the very few, which succeeded due to the multi-racial cast of Conrad Bain as Philip/Mr Drummond, Dana Plato as Kimberley, Todd Bridges as Willis, and the lovable scamp, Gary Coleman as Arnold Jackson. The performances given by the main leads in Diff’rent Strokes was great, particularly Conrad’s as the strict but fair, Mr Drummond. Mrs Edna Garrett played by Charlotte Rae was funny, charming and witty and a great addition to the cast. But the star of the show was Coleman as Arnold and his famous catchphrase ‘whatcha talking’about Willis?’.

Even though it was a sitcom, the show wasn’t afraid of tackling and addressing social and controversial issues such as child molestation, racism, bulimia, class division and sex for example. The writing was funny but also sharp, witty and clever. Arnold has arguably the best and funnier lines out of all the characters, although Philip isn’t that far off either.

He was one of the reasons why Diff’rent Strokes was such a huge success story, as Coleman’s comic timing was almost spot-on. The cutesy factor that accompanies his cheeky and somewhat mischievous persona as Arnold was a huge incentive on his part.

There have been many sitcoms past and present, which centred around youngsters as the main protagonists, but whilst most of them have tried they have failed, mainly because one of the reasons for this is that those shows do not possess a central character as humorous, as versatile as Arnold and of whom has a personality of which viewers can fall in love with straight away.

Diff’rent Strokes didn’t have just one but three child characters in Kimberly, Willis and Arnold. The concept was original and addressed the issue of child adoption in a straight-to-the-point manner but at the same time combine laughs with clean cut jokes, good gags and great humour. It’s such a shame though that the notoriety of the show, in regards to the child performers was always brought up; likewise Coleman’s own brushes with the law and surprising fall from grace, Todd’s battle with drugs, and the rather unfortunate and well documented demise of Dana and her subsequent death during the late 90s, slightly tarnished the mainstream success, as well as history of Diff’rent Strokes. Next year in 2008, it will be the 30th anniversary of Diff’rent Strokes, since its debut in 1978.

All in all though, this was a great little sitcom, starring a little guy with a big heart played by Coleman which was destined to be a big hit, which it was and one that captured millions of audiences hearts, worldwide.