“Imagine the formation of teenage legislation
At thirteen they were fooling
But at sixteen they’ll be ruling!”

It’s 1973 and I’m standing in Timothy Whites and trying to make a pivotal decision regarding my future musical direction. Should I take my dad’s advice and get the latest Top of the Pops LP, after all it’s got a woman on the cover and you get lots of songs for £1, or should I buy a single with no picture sleeve and just two songs for 45np? To my dad’s obvious displeasure I took the single option and bought “Hell Raiser” by the Sweet – probably one of the best decisions I have ever made! 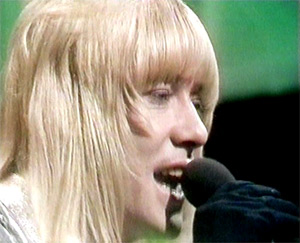 Initially called Sweetshop, the Sweet were formed by Mick Tucker (drums), Brian Connolly (vocals), Steve Priest (bass) and Frank Torpey (guitar). Between 1968 and 1970 they released four singles on Fontana and Parlophone, all of which were unsuccessful, and these are now the most collectible of their releases with the Fontana item being worth in excess of £500.

Following these releases there were three major changes which led to the Sweet becoming the group that became synonymous with glam rock – Frank Torpey left and was replaced by Andy Scott, they signed to RCA and they teamed up with the classic song writing partnership of Nicky Chinn and Mike Chapman. While the Sweet’s initial success was with the bubblegum pop that was so popular at the time (the sort of tracks that you could hear on “Lift Off With Ayshea”) they were still producing hard rock tracks as b-sides that helped to keep their credibility.

The Sweet really hit their stride when their songs took a rockier vein with four hits that for me helped to define glam rock – Blockbuster, Hell Raiser, Ballroom Blitz and Teenage Rampage. While they were derided by some for ripping off riffs (try playing Blockbuster back-to-back with Bowie’s Jean Genie) and playing to stereotypes (the outfits, the effete bassist, the questionable sexuality) there is no question of the effect they had on the charts and television. Their image was perfect for television shows and the more they appeared the more extreme it got!

After their run of success with Chinn and Chapman the Sweet decided to take control of their own affairs in 1974. The first LP they recorded was “Sweet Fanny Adams” and this marked the group’s move away from the radio friendly, commercial tracks that they were known for and concentrated more on the hard rock aspect of their music. Despite a hit with “Fox On The Run” in 1975 and their swan song “Love Is Like Oxygen” in 1978 they never truly repeated their previous chart successes. Away for the charts however they remained a strong act capable of pulling in the crowds. In 1982 the group split and over the subsequent years different versions of the group have toured.

While seen at the time as a manufactured band the Sweet were always true to themselves – the over-the-top make up on TOTP started because they wanted to go into the dressing room used by Pans People and watch them change – they could play their own instruments and they partied long and hard (ultimately leading to Brian’s death in 1997).

So 33 years after my key decision in Timothy Whites what do I think of the Sweet now? Well, I still have my copy of “Hell Raiser”, it’s worn and has my initials in felt-tip on the label but it still gets played and I have my memories of the Sweet playing “Teenage Rampage” on TOTP and Brian Connolly breaking the mic stand over his knee. Most importantly however I have my Sweet MP3s – is it right that a 42 year old should be listening to “Teenage Rampage” while on the train going to work??

Let the 70s music ease the stress from your bones.Take off your disco shoes and sit yourself down on my giant bean bag, that's it just sit back and relax. Let me pry those memories from the deepest corners of your mind by taking you for a stroll through the archives.