One of my favourite groups from the 70s has to be The New Seekers. Not the cololest of groups but like most lads in those days I had a pin up of Lyn Paul on my wall next to the winning FA Cup Chelsea Squad. They played easy going catchy music that was always a pleasure to listen and sing-a-long to. Of course I have my personal favourites that remind me of a place in time during the 70s that mean a lot to me but then I’m sure everyone does.

Born out of the ashes of The Seekers in 1969, Keith Potger, an original band member was to be the brains behind this new group. Starting off as a backing group they quickly progressed with a hit in the States in 1970 with What have they done to my song ma. Encouraged by this success it wasn’t long before they had their first big UK hit with Never Ending Song of Love. I’m sure at that time they couldn’t have had an inkling of the success that was going to come their way because of a small, bottled fizzy drink.

It was 1972 when the group hit the headlines and the number one spot. A certain 30 second commercial for coca cola was shown worldwide and I’d like to teach the world to sing reached number one on January 8th and stayed there for four weeks. Eve Graham, Lyn Paul, Marty Kristian, Peter Doyle, and Paul Layton were at the top and in demand everywhere and were the perfect choice for the Eurovision Song Contest coming second with the bright Beg, Steal or Borrow.. Hit after hit followed, Circles, Come softly to me which although a short record was one of my favourites and not scared of trying new things they even had a hit with their version of Pinball Wizzard. Reverting back to their own style they hit the number one spot again with You won’t find another fool like me and followed it up nicely with I get a little sentimental over you. 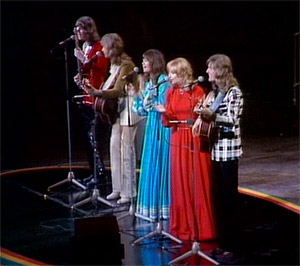 Circles and Never ending song of love are two songs that have stood the test of time and have always given me a certain feel of deja vous with every play, other songs that hold a place at the top of my favourites are Nevertheless with Eve Grahams vocals standing out in 1973 and I get a little sentimental over you in 1974.

They split in 1975 and reformed in 1976 with a few new faces Danny Finn and Cathy Logan. Although The New Seekers have changed over the years with their line up Marty Kristian is still holding firm but sadly in 2001 Peter Doyle passed away,

Lyn Paul has her own website and features a lot of her own memories of her time with the group and her time acting in the theatre, well worth checking out. The dvd of the group performing at The London Palladium in 1972 shows just how much talent the group had, no backing group and only guitars and great voices and harmonies…need I say more. 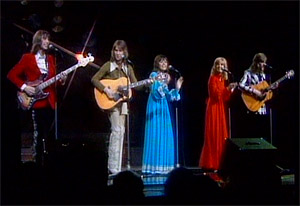 If you go into a record shop I’m sure you’ll find these under the section easy listening which is really a perfect way of describing this group. Listening to one of their records is like meeting an old friend, it makes you want to sit down and reflect on times gone past.

Let the 70s music ease the stress from your bones.Take off your disco shoes and sit yourself down on my giant bean bag, that's it just sit back and relax. Let me pry those memories from the deepest corners of your mind by taking you for a stroll through the archives.