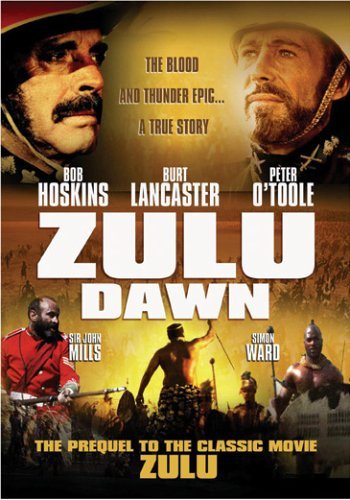 Works Better As A history Lesson Than A Film,
ZULU DAWN lives in the shadow of ZULU. That’s hardly surprising because ZULU is the much better film, however unlike the 1964 film DAWN does stick to historical accuracy. The British are portrayed rightly as being overconfident, arrogant and foppish and it’s this hubristic attitude that has lost wars when a superpower looks down its nose at the fighting capabilities of a backward third world nation. The British almost repeated the same mistakes during the Boar war, and the French and Americans done it in south East Asia, and the red army did it in Afghanistan.

DAWN does chronicle in great depth the mistakes made at the battle of Isandlwana: Chelmsford split his forces, the army didn’t reinforce the perimeter, they were spread too thinly, and the method of supplying ammo was totally flawed, but it’s this that spoils the film, there is too much emphasis of what happened to cause this defeat. Despite having an all-star cast (Two of which won Oscars and a couple more who have been nominated) there’s little character focus and you care little for the people involved. The film would have worked much better if it concentrated on just Chelmsford and Bob Hoskins gruff Sgt Major instead of the many characters who drift in and out of the picture.

ZULU DAWN isn’t a complete waste of time though, despite the long wait the battle scenes are handled well (But not as good as ZULU) and like ZULU it shows that a lot of brave men died on both sides