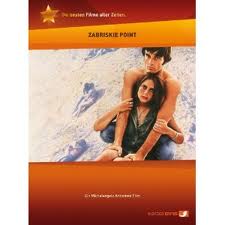 Thirty two years has put in place a focus the film never had in 1970
At the time of its release, ZABRISKE POINT caused great division in film-going circles. A “wannabe classic but artless piece of empty canvas” was the view of the establishment, most critics included. To the alternative movement…a “revelation of everything that is wrong in the world today (1970)”

Poor old Mark Frechette and Daria Halpin as the star crossed lovers – definitely in the wrong place at the wrong time (weren’t they EVERY wronged and downtrodden teenager of the period???) copped most of the flack, totally unreasonably. They were SUPPOSED to be Mr and Miss typical troubled youth, not Rhett Butler and Scarlett O’Hara on a bender! This was an image-driven film and many flag waving americans were incensed that Italy’s outre director Antonioni was given free rein to portray the angst of American youth.

Cinematically, the film was awesome. In London at the time, I saw it on its release and thought that from an objective viewpoint it was quite brilliant (admittedly, I was only 24 myself). Many have commented on its alleged self-indulgence. Yeah, well it WAS Antonioni’s film – surely he was free to express his art-form in whatever way he saw fit at the time? The desert scenes have not been topped by any film since.

ZABRISKIE POINT may be shy of “masterpiece” status (mind you, who amongst is solely qualified to make THAT call?) but it is probably now, THE defining film of 70’s culture. A time when acid trips, communal living, even just plain old fashioned “love” were not that easy a choice to live with!