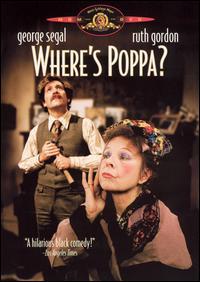 A mild-mannered NY lawyer (George Segal) is slowly going crazy. He promised his father on his death bed that he would NEVER send their senile mother (Ruth Gordon) to a nursing home. Years later he’s taking care of a senile, dangerous psychopath. He meets a beautiful nurse (Trish Van Devere) and they fall in love. But his mother keeps scaring her away. Segal is ready to kill her….

Ummmm…THIS is a comedy? I have nothing against sick, black humor but come on…there HAS to be some limits! This movie goes out of its way to throw every tasteless sick joke it can think of and rub your face in it. Too bad none of the jokes are funny. The jokes involve rape, nudity, public humiliation, senile old people, swearing and racism. Basically this is a movie that thinks it’s clever by trying to shock people and thinking they’ll laugh at it. I was disgusted and didn’t laugh once. The movie is morbid, disturbing and (surprisingly) dull. The cast is the only thing that kept me watching. Segal and Gordon were both wonderful in their roles–Gordon especially. And Van Devere is pretty good also. But the script is against them. The only interesting thing (not funny) was a pointless courtroom scene with Rob Reiner Jr. (and try to spot his then-wife Penny Marshall as a spectator).

Actually this movie could have been worse–the original ending had Segal getting into bed with his MOTHER and pretending he’s poppa! That was (thankfully) changed.

A real lousy, sick film. Bottom of the barrel. I give it a 1.