Trog – 1970
From a million years back…Horror explodes into today! 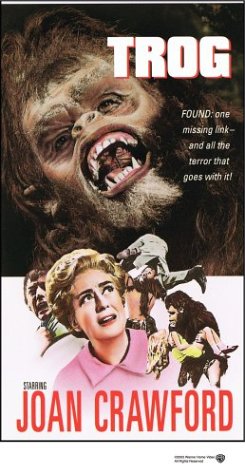 Wild Thing – I Don`t Think I Love You,
I thought this was going to be one of those ” So bad that it’s good ” type movies, an optimism that was built on the DOCTOR WHO standard of cave sets (To be honest the cave sets from DOCTOR WHO are far better) not to mention Trogs make up or his method of killing people by throwing paper mache boulders at them. Unfortunately much of TROG descends into a morality play with a political subtext: i.e. Trog is an allegorical criminal with Doctor Brockton being the voice of progressive compassion while Sam Murdock is the reactionary flog them and hang them type.

This might actually be coincidence because the last third of the film goes against the logic of being a morality play, mind you there’s little logic to the script in the first place, for example why would jazz make Trog angry and classical music soothe the angry beast? I’d have thought he’d be unable to notice differing musical styles. How would surgery be able to make him speak? Language vocabulary and communication isn’t only down to vocal ability, oh and there’s no way Trog would have been able to recognise dinosaurs, as they would have died out millions of years before he existed.

TROG is a very patchy Brit B movie. It is enjoyable in places (For all the wrong reasons) but you have to sit through a lot of talky scenes for them to arrive

Sad,
Joan was obviously DESPERATE for work to do this. A predictable, boring horror film about a troglodyte (the missing link) being found, captured, escaping, wrecking havoc…yawn.

The story is, to be nice, thin and the makeup on “trog” is so hysterically bad it has to be seen to be believed. It’s a guy with a gorilla’s head and some fur on. That’s it! I was surprised that people didn’t burst out laughing when they first saw him. The only excitement I got out of this was at the beginning when a handsome hunky guy stripped down to his underwear to go into the water to a hidden cave. Some (tame) bloody murders pop up and there’s some cool stop motion dinosaurs too but that’s about it.

Crawford, always the pro, manages to give out a good performance but she also appears to be drunk half the time. No surprise there–I think anyone would have to be bombed to agree to appear in this. Michael Gough, chewing the scenery as always, gives out the only other good performance as an evil land developer. The scenes between him and Crawford are quite interesting–in a fun way. But this movie is really a waste of time.

Too bad this was Crawfords’ last movie…but if it’s any consolation her rival Bette Davis’last movie (“Wicked Stepmother”) was even worse! Either way–avoid.

“If you’re the missing link you should be missing!”

A movie based on a costume from 2001 that someone found in the garbage,

Joan Crawford’s infamously bad swan song, the story of an anthropologist (Crawford) who makes a study of a missing link, whom she dubs “Trog” (short for “troglodyte”). The film is extremely cheap and cheesy. Hey, I like extremely cheap and cheesy. If it were only that, I probably would love the movie. But what makes the movie bad is its slow pace. People talk interminably about stupid things, and the boredom sets in and never leaves. The scenes where Trog and Crawford play ball are the very definition of camp, and I would have much preferred Trog’s final rampage to last 80% of the film’s run. So, due to boredom, this truly is a terrible movie. It may be bad, but I still liked it more than Love Story, which was released the same year.