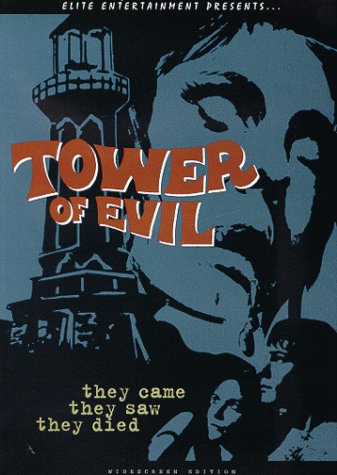 Maniacal slaughter…and hunting for treasure!
Take my word on this…Tower of Evil is a MUST SEE if you’re an admirer of raw, vicious and undiscovered horror. This film is so much fun I can’t believe I just found out about it now! It’s cheap and nasty, but very imaginative and spirited!

Tower of Evil is appropriately set on a deserted island, carrying many secrets. After discovering the mutilated corpses of 3 teenagers and one severely traumatized survivor, an expedition team is sent to the island. An older sailor and a young handsome stud, both obviously keeping a few secrets hidden, guide the team. But the members of the expedition are more dealing with sexual intrigues and relational problems anyway. They encounter a savage caveman, severely decomposed human leftovers and authentic hidden treasures! Yay!! Horror with a twitch of adventure!

The plot of `Tower of Evil’ isn’t exactly solid or logical, but director O’Connolly manages to create suspense nonetheless. Due to the isolated and raw location of the Snape Island, you feel trapped there along with the main characters. For the fans of typical 70’s horror, there are several gruesome moments to enjoy as well as some ultra-sexy sleaziness. For example, one of the main actresses constantly wears a bikini-top, which ranks as one of the hottest ones since Raquel Welsh’s in `One Billion Years B.C.’.

`Tower of Evil’ is a true gem of the ignored horror vaults and real fans can’t afford to miss it!

Pretty dull and stupid,
A bunch of kids are found murdered on a remote island. Only one is alive and totally insane. It’s determined that she killed everyone else. Another group travels out to the island to see what happened and find out that she didn’t do it. Something is loose on the island and starts to hunt them down…

A pretty dull horror film. All the characters are unpleasant (you WANT them all dead), the acting is bad, there are horrible 1970s fashions and the killings are (for the most part) pretty mild. Also you see a bunch of British actors all trying (badly) to fake American accents (the kids who are killed first). Heck, one guy had to be dubbed in! There is plenty of nudity–the girls show their chests, the boys only their butts. What really kills this film though is the confused script which has the characters doing incredibly stupid things.

They all know a killer is with them on the island so they immediately separate leaving the women alone; a woman stands and just screams endlessly as her boyfriend gets hacked up in front of her (this happens TWICE!) and a woman tries to escape from the killer by running upstairs. Also these people seem to get over the deaths of their companions very quickly. Look how Dan gets over his wife’s death and how they all react to Bron’s dead body.

The DVD transfer from Elite is great–widescreen, good print and in strong colour…but the movie just isn’t good. I heard this helped kill the British film industry–it’s easy to see why! I give it a 4.