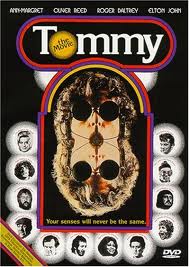 Dated but lots of fun!,

Tommy is very 1970s–the clothes, the music, the drugs…but it’s lots of fun. Also if you came of age in that era (like me), it’s very nostalgic. The movie is stunningly directed by Ken Russell–the imagery is astounding and manages to complement the music. The music is, for the most part, good, but the Who obviously made changes for the movie–and not very good ones. The acting is all good, especially Ann-Margret who was nominated for an Academy Award for Best Actress for this movie. I think she got nominated just for her sequence with the exploding TV!

Most of the singing is great (Ann-Margret, Tina Turner, Elton John) but there are a few who should never have been allowed to sing (Oliver Reed, Jack Nicholson, Keith Moon–he was a great drummer but no singer!). My only complaint is it loses a lot on TV. I saw it in a movie theatre on a large screen and loud sound. It blew me away! On TV, you don’t get the same effect.

Still, worth watching. If you get a chance to see it in a movie theatre, don’t pass it up!