Thunderbolt and Lightfoot – 1974
He has exactly seven minutes to get rich quick! 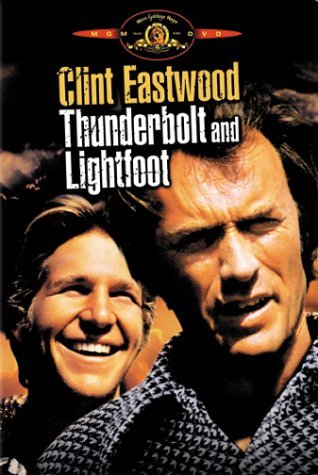 Works On So Many Levels,
This is a movie that crosses many genres , you can look upon it as a heist movie , a road movie , an action comedy or perhaps ( As some critics claim though it might be stretching things a bit ) a gay love story . Whatever you interpret THUNDERBOLT AND LIGHT FOOT as it works on so many levels.

There is some evidence of the faults of Michael Cimino that would become prominent in his later movies but ironically here they’re strengths rather than weaknesses like the psychotic hill billy who keeps rabbits in the trunk of his car . This scene adds absolutely nothing to the plot but sticks out in the mind due to its quirky nature and the movie is full of these amusing moments like the naked housewife at the window and Red’s shocked expression at catching the petting teenagers.

Red ? Oh you mean the sexually repressed Korean war veteran . Yeah he’s one of the more memorable bad guys to have appeared in American cinema in the 1970s ably played by George Kennedy . All the cast are good even though Clint Eastwood is basically playing himself but it’s impossible to mention the cast without mentioning that this is Jeff Bridges film . He gives certainly one of his finest performances in a distingushed career.

THUNDERBOLT AND LIGHTFOOT is one of those movies where the director wrote the script and which unfortunately leads to the director being accredited to the driving force rather than the screenwriter . Would this movie have been so enjoyable without lines like

” Hey flattery is going to get you nowhere ”
Or
” I know , why don’t we get jobs ”
” Goody you’re better at asking questions than answering them ”

There is a fairly large plot hole involving the missing money being hidden behind a blackboard at the end – No one noticed the money in the bags when the school was moved ? Is this credible ? Probably not but this is an enjoyable movie and contains one of the most poignant endings seen in cinema.