The Thing With Two Heads 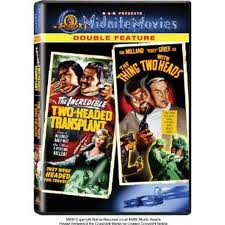 The head of a white bigoted doctor (sadly Ray Milland) is attached to the body of a wrongly convicted black man (Rosey Grier) on Death Row. Unfortunately, Grier’s head is still attached. It escapes from a hospital and tries to clear Grier’s name while Milland’s head tries to take control of the body.

Totally ridiculous AIP movie which bears a more than passing resemblance to 1971’s “Incredible Two-Headed Transplant”. This movie doesn’t take itself too seriously (how could it?) which helps–but only so much.

With the exception of Milland the acting is lousy and the script has howlers that you just can’t believe (ex: when Grier’s girlfriend first sees him with Milland’s head she says, “Honey, I know you don’t like answering questions, but HOW did this happen?”). Basically this is a very bad movie but in a good way. The scenes of Milland and Grier arguing are truly funny and there’s a very long (at least 20 minutes) but fun chase with tons of police cars chasing Grier/Milland on a motorcycle. Not even remotely good but fun.

Another great line from Grier’s girlfriend: “Do you have two of anything else?”