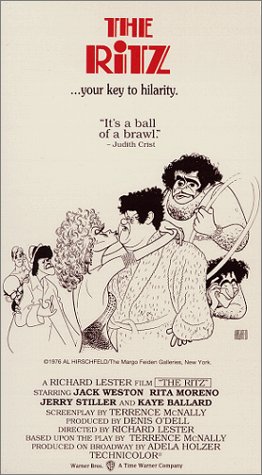 Break Out The Bath Towels: The Ritz Is One Of The Best,
Chunky, quivering, middle-class ordinary Gaetano Proclo (Jack Weston) is ‘married to the mob’ in the form of wife Vivian (Kaye Ballard)–and his crazy brother-in-law Carmine (Jerry Stiller) hates him. Certain that Carmine is about to kill him, Gaetana hops a cab, tells the driver to take him to the last place any one would ever look for him… and suddenly finds himself hiding out in the middle of a gay bath house.

But this only the first ten or fifteen minutes of the film: there is much, much more to come, and all of it is over the top hilarious. Jack Weston, Jerry Stiller, and Kaye Ballard are perfectly cast in their roles, but would you believe F. Murray Abraham (Oscar winner for AMADEUS) as the screaming queen to end all screaming queens? How about Rita Moreno as a no-talent lounge singer who is busting a gut to become a bath-house star just like Bette Midler? Or Treat Williams as a P.I. with blonde hair and a squeaky voice? My own favorite of the bunch is Paolo Poeti as Claude, a “chubby chaser” who takes one look at Jack Weston and falls in love at first sight–and then proceeds to make his life absolute hell by chasing him all over the bath house.

Before it’s all over you’ll find people hiding under beds, thrown into swimming pools, impersonating the Andrews Sisters, and being pursued by unwanted lovers of the wrong persuasion, all to absolutely hilarious, incredibly giddy effect.

Like most farces, THE RITZ deals in stereotypes–but it is never mean spirited in its portraits, and the cast carries off the eccentric characters (both straight and gay) with considerable aplomb. Filmed long before the AIDS crisis, THE RITZ offers a comic look at a New York gay bath house and a way of life that would soon come to a grinding halt–a fact that gives the film a certain unintended poignancy for gay viewers. Even so, you don’t need any specialized background to enjoy this laugh-out-loud movie, which is as much (and really more) for a straight audience as it is for a gay one. Highly, highly recommended… call over some friends, turn up the steam heat, break out some bath towels, and get ready for a true laugh riot.