The Reincarnation of Isabel 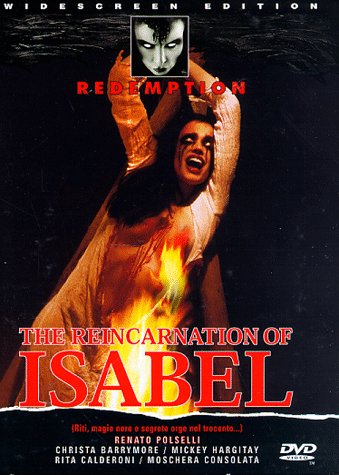 Beauty…sleaze…and a lot of confusion!,
This long-lost exploitation treasure surely lists among the weirdest films I ever saw. To be quite sure, I’m still don’t know how to give a rating to it… the plot is full of nonsense and illogicalness and impossible to summarize. In fact, I would have turned off this movie much earlier if it wasn’t for all the beauty it features.

The Reincarnation of Isabel has an amazing force on attraction! It constantly introduces barely-dressed beauty queens and photographs them in the most stylish and sensual ways you’ve ever seen! Although no structure whatsoever (the plot jumps back and forth in time, seeing it handles about some sort of immortal vampire cult who sacrifices virgins every twenty-fifth moon… or something), you just can’t press the `stop’-button on the remote of your DVD-player.

Fans of macabre cinema will regard this film as an absolute highlight…even they won’t get it, neither. It purely has to be seen for its weirdness and incomprehensible style. Sleaze, violence and atmosphere like you’ve never seen it before.

For the eccentric cinema-freaks among us!