The Private Life of Sherlock Holmes

The Private Life of Sherlock Holmes – 1970 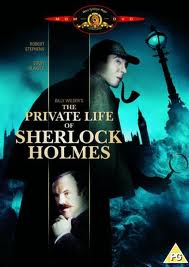 There were cases that Sherlock Holmes worked on that were deemed of a “scandalous nature” and not for public knowledge. But Dr. Watson made journals, and as Watson’s private deposit box is opened some 50 years later, one such journal now sheds light on one particular tricky case, and one that also delved deep into the private life of the greatest of sleuths.

Billy Wilder film’s rarely need an introduction, with a CV that contains Stalag 17, The Apartment, Sunset Boulevard and Some Like It Hot, his output, it’s safe to say, is mostly remembered and quite rightly is often praised. The Private Life of Sherlock Holmes is not forgotten by Wilder fans, but it most certainly is his most underrated. Originally made as a three hour movie, the film was taken from Wilder and snipped to a two hour picture. So where once there was a four story narrative, weaved together as an episodic humanisation of the “consultant detective”, now sits a two story movie. That’s it’s still a fabulous movie is a towering credit to Wilder and his long time associate, I. A. L. Diamond. With Wilder declaring his displeasure at the final cut of the film, it promptly bombed at the box office. Further lending weight to its reputation as something of a stinker. But time has been kind to it, where the advent of various home format releases and internet discussion forums has seen its stock rise considerably. And rightly so.

Wilder deals an irreverent take on Sherlock Holmes, but one that is not disrespectful to the world created by Arthur Conan Doyle. It’s a loving recreation that simply portrays the man as a flawed, yet still genius like, human being: one with his own hang ups and insecurities. Once this has been established in the first third of the movie, and hopefully accepted by the audience, Wilder and co then take us into familiar “case to be solved” territory. Once a bedraggled Geneviève Page turns up at 221B, suffering from amnesia and clearly in need of help, we are whisked along with our intrepid duo on a journey involving canaries, midgets, Trappist monks, Queen Victoria and the Loch Ness Monster. With Sherlock’s mysterious brother, Mycroft (Lee), front, centre and very involved too. It may not be a mystery to appease purists of the Holmes literature, but it’s real good fun and contains one or two twists and revelations along the way.

Robert Stephens plays Holmes as fey yet articulate, intelligent yet complex, but always with a nod and a wink that surely pleased his knowing director. Colin Blakely is pure effervescence as Watson, excitable and exuberant and perfect comic foil for his more mannered partner. Lee is utterly splendid as the straight laced Mycroft, Page adds a simmering sexuality to the proceedings and Handl is joyously sarcastic as Housekeeper Mrs.. Hudson. Look out, too, for celebrated stage and screen actor Stanley Holloway as a gravedigger. Rózsa’s score is very upbeat, even for the more reflective moments, further evidence of Wilder having tongue nicely nestled in cheek, and the score sits snugly with Challis’ pleasing photography around the Scottish Highlands. Major bonus here is the marvellous sets by Alexandre Trauner, particularly the recreation of Baker Street, for here be a sometimes forgotten cinema art at its grandest.

A crisp script is crisply executed by all involved, this film deserves the credit that is now finally coming its way. 8.5/10

Sherlock Holmes (Robert Stephens) and Dr. Watson (Colin Blakely) get involved in a very weird case involving a mysterious French woman (Geneuieve Page), Sherlock’s brother Mycroft (Christopher Lee), midgets, Scotland, the Queen and the Loch Ness Monster! Believe it or not they all come together. I originally saw this on TV back in the late 70s but it was so heavily edited (for instance, the entire first half hour was gone! Probably because it dealt with gay characters which was still a taboo on TV back then) that I couldn’t follow it and gave up. Now it’s back on uncut and I’m glad I’m finally able to see it.

A very strange movie, but lots of fun. Some people think this is a spoof. It really isn’t but there are some very funny moments–my favorite is at the beginning when Holmes blasts Watson for how he writes about his cases–“Watson, I’ve never said ‘elementary my dear Watson’ in my life!””Poetic license Holmes”. There’s also quite a few funny one liners mostly delivered with great relish by Stephens and it does deal with the sexual relations of Holmes and Watson (it was hinted that they were gay lovers). But it does involve a very serious case and the jokes stop towards the end.

Stephens is actually very good as Holmes–he won’t make you forget Basil Rathbone but he’s not bad. Colin Blakely isn’t as big a buffoon as Nigel Bruce was but he tends to overact a little. Page is just terrible as the mystery woman–but then again, English is her second language. Lee, surprisingly, is kind of stiff as Mycroft. He’s a very good actor–I’m surprised to see him so bad.

The movie is very lavish (probably because Billy Wilder was involved)…a lot of money and attention was given to sets and costumes, and they actually went on location to shoot the end in Scotland. The cinematography is just beautiful and the movie was never dull. It doesn’t always mix the comedy with the drama successfully but it works more often than it misses.

Worth catching…a must see for Holmes fans.