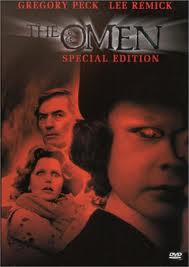 One of the better horror films,

Robert Thorn (Gregory Peck) is the American ambassador to England. His wife Katharine (Lee Remick) gives birth to a baby who is born dead. Without letting her know Thorn switches her baby with another whose mother died while giving birth. Things are fine until Damien (Harvey Stephens) turns five. Then people start dying and Peck realizes that little Damien may be the Antichrist.

HUGE hit in 1976. I saw it when I was 14 at a theatre. I remember liking it but being disappointed. It had an R rating so I expected a much bloodier picture than what I saw. Seeing it again my feelings have changed a little. It still is a very good film and it really doesn’t need blood and gore to tell it’s story…but I now find it slow and uninvolving. Everyone knows the ending by now and for a film that runs almost two hours that’s not good. Still it is worth seeing.

The direction by Richard Donner is great (he really knows how to use a widescreen); Remick and Peck are excellent (although I do wonder how they got them to agree to do a horror film); the deserved Oscar-winning score by Jerry Goldsmith helps the film immensely; the script is good and Billie Whitlaw is downright terrifying as Mrs. Baylock–the scene where she goes after Remick in the hospital has always scared me silly.

The deaths are inventive (to put it mildly) but very bloodless. Even when Jennings (David Warner) gets his head cut off there’s next to no blood. Also that’s the best part of the picture–the effect is convincing, the music is pounding and Peck’s reaction is realistic.

So this is a little slow but the writing, acting, direction and music more than make up for that. I give it an 8.