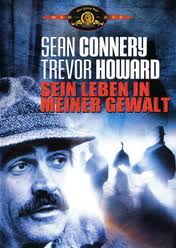 Something Like the Truth
The Offence is directed by Sidney Lumet and adapted to screenplay by John Hopkins from his own play titled This Story of Yours. It stars Sean Connery, Ian Bannen, Trevor Howard and Vivien Merchant. Cinematography is by Gerry Fisher and music by Harrison Birtwistle.

Detective Sergeant Johnson (Connery) has been with the British Police Force for two decades, in that time he has been witness to countless murders, rapes and other serious crimes. The images, the people he has had to deal with, have left a terrible mark on him. When suspected child sex attacker Kenneth Baxter (Bannen) comes up for interrogation by Johnson, his mind starts to fracture and he loses control, unleashing a dark side that comes out both physically and mentally.

You wouldn’t think it possible for Lumet and Connery to have a hidden gem in their respective career outputs, but The Offence is very much just that. An unnerving skin itcher with an upsetting narrative core, The Offence was a commercial flop. It barely got released across the globe and only found its way onto home format release in the last 10 years. The film only got made after Connery struck a deal with United Artists, he would only return as James Bond for Diamonds Are Forever if they backed him for a couple of projects. One of which was The Offence, so with free licence to play Johnson, and his choice of Lumet in the directing chair, Connery got the film made.

Set with a bleak concrete back drop of a “New Town” (cheaply built monstrosities the government knocked up to ease the housing issues), The Offence is a fascinating blend of police procedural and psychological drama. It poses many questions, and thrives on ambiguity to the point repeat viewings are a must, but in the main what shrieks out is the thematic point of one mans harrowing employment taking its toll on he himself. Is it possible that you can only chase and be amongst monsters yourself for so long before you become one of that number? It’s invariably hard to recommend the film as high entertainment, a comfy night in by the fire this film is not. But as film art, a searing character study and acting supreme, it scores impressively high whilst tantalisingly tickling the cranium. It’s very dialogue heavy, and Lumet as polished a director as he is, keeps it grainy, revelling in the bleakness of the story. Connery has never been better, utterly compelling, a brooding force of nature and as committed to role as he has ever been. Nor, too, arguably, has Bannen, the scenes shared between the two men are lessons in acting as they portray two warped minds bouncing off each with an unsettling force that grips us round the throat and refuses to let go long after the credits have rolled. Howard steps in to add a touch of mature quality, he too bringing the best out of Connery in the scenes they share, while Merchant as Johnson’s “on the outside” wife, is raw and heartfelt.

You can’t pigeon hole The Offence, it’s very much one of a kind and it demands to be tracked down by serious film fans. From the low key score and foreboding 70s setting, to the gripper of a denouement, The Offence is an essential piece of British cinema. 9.5/10

Depressing, disturbing,
An English police officer, Sgt. Johnson (Sean Connery) is cracking under pressure on his job. He beats a rape suspect (Ian Bannen) to death. But why? Was it the pressures of the job…or something else?

Combination murder mystery and character study. This film was a major bomb in 1973 and quickly disappeared from view. It’s still virtually unknown–I had no idea it even existed till it popped up on cable! That’s really a shame. It IS a very dark, depressing film but it’s always absorbing and easily contains one of Connery’s best performances. He’s letter perfect as a tired, disgusted police officer who doesn’t know how to deal with his job and the stress. There’s an especially harrowing sequence between him and his wife (Vivien Merchant) when he tries to explain to her what’s happening to him–and she can’t deal with it. Incidentally, Merchant’s acting is superb also but it makes the scene very uncomfortable to watch. Also, Merchant was suffering from alcoholism at the time and she (understandably) looks horrible–but it fits the role. Also Trevor Howard turns in a good performance as a lieutenant who has to question Johnson. Don’t let his top billing fool you–he doesn’t show up until over an hour in and is only around for about 20 minutes.

The picture isn’t perfect for one thing, the opening credits are in slow motion with a VERY annoying sound playing all through it. Also it gives away the ending. And director Sideney Lumet is (almost constantly) flashing a bright light in our faces–it’s annoying and not needed. The identity of the rapist is never made clear (it’s suggested–that’s all) and Bannen (as the suspect) gives a VERY strange performance. I didn’t know what to make of his character.

Still, it is a great, if disturbing, motion picture…faults aside. Worth catching…but brace yourself. It’s pretty strong stuff.