The Mean Machine – 1974
aka The Longest Yard 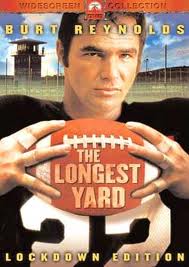 Burt Reynolds plays an ex-professional football player turned prostitute who hates himself and lands in prison. In there he is forced to train a bunch of convicts to be football players so they can play a game against the prison guards. Through this he gains confidence and leads his team for an all-out, no holds barred game.

First off, some posters have taken this film way too seriously. They complained that the movie has us cheering convicts that are rapers, murderers, etc etc. Come on! This is a FANTASY! How many prisons would let convicts and guards have a football game? None! So get over it…this is a no-think, brutal, dirty and very funny movie.

It moves very quickly and there’s some clever use of multiple screens when the big game starts. Also, you don’t need to know or like football to enjoy this movie. I don’t like it or understand it but I loved this movie! Seeing Burt Reynolds so young and full of life is incredible. Also he gives a pretty good low-key performance. Eddie Albert is perfect as the hissibly evil warden. There are only two women in the film–a woman who is cruel and pushed around by Reynolds at the beginning and Bernadette Peters with a most interesting hairdo.

Only complaint–why does the “cheerleading squad” composed of all black men in drag? It adds an ugly tinge of homophobia and racism. But then again this IS a guys flick!