The Mansion of Madness

The Mansion of Madness – 1972
aka Dr. Tarr’s Torture Dungeon
The madness of the mansion is uncontrollable! 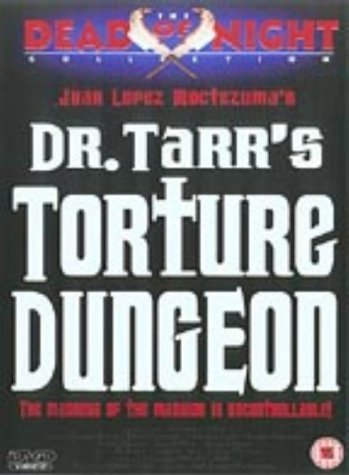 Dr. Tarr’s Torture Dungeon (the more appealing a.k.a of this film) surely is one of the most bizarre films I ever saw. But then again, it qualifies as Mexican exploitation and you never know what to expect from these guys.

I would love to summarize the plot a little but that’s nearly impossible considering this is an incoherent series of absurdity, sleaze and semi-psychedelic stuff. The closest I can get is describing how the story takes place in a French asylum hidden in the woods, where doctor Tarr and professor Feather feast their most perverted barbarities on the poor and helpless patients…and yet they like it! My personal favorite is a guy – referred to as Mr. Chicken – who lives in a pen, alongside the other poultry. You should see how happy he is!!

The screenplay is supposed to be adapted from an Edgar Allen Poe story but, even though I haven’t read it, I suspect that the premise is replenished with many elements from the makers’ own wicked imagination. As often the case with this type of cheap exploitation films, it features a surprisingly stylish cinematography and many addictive elements. Especially the mesmerizing opening sequence, with its wonderful blaze of colors, immediately draws your attention. The use of silly music is hilarious and you can only feel sympathy for the actor while they’re attempting to rattle their exaggeratedly complex dialogues.

This is the kind of cinema that normal human beings refer to as crap and complete rubbish. Only the people with a macabre sense of humor love it and regret that there aren’t more films like this to find. I, for one, am proud to have it in my cult-collection.