The Man with the Golden Gun

The Man with the Golden Gun – 1974
The world’s greatest villain’s have tried to kill James Bond. Now it’s Scaramanga’s turn to try! 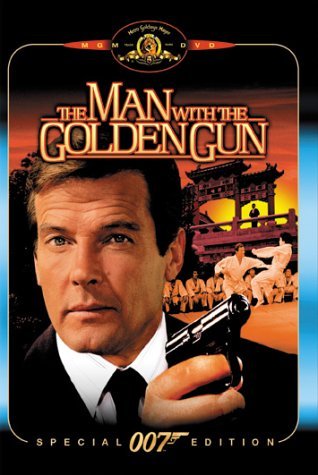 You get as much pleasure out of killing as I do, so why don’t you admit it?
The Man with the Golden Gun is directed by Guy Hamilton and adapted to screenplay by Richard Maibaum and Tom Mankiewicz from the Ian Fleming novel. It stars Roger Moore, Christopher Lee, Britt Ekland, Maud Adams, Herve Villechaize, Soon-Taik-Oh, Richard Loo and Clifton James. Music is scored by John Barry and cinematography by Ted Moore & Oswald Morris.

Bond 9 and 007 is distracted from his pursuit of the Solex Agitator when it appears he has been targeted for death by famous assassin Francisco Scaramanga.

This would be the last Bond movie to be produced by the partnership of Broccoli and Saltzman, the latter of which was the one to leave. Perhaps they fought about what direction Moore’s Bond should be taking? Because The Man with the Golden Gun is not a fitting film for them to part on, their fall out most likely impacting on why this is a pretty unadventurous entry in the James Bond franchise. The film plays more as a slapstick comedy than an action adventure. The script is uninspired, with the characters of Mary Goodnight (Ekland) and Sheriff Pepper (James) reaching new lows for Bond allies, while some of the situations that arise are just bizarre and lazy. The latter statement of which applies big time to the weak finale.

However, even average Bond films have value somewhere in the mix. Here there’s some grit in Moore’s performance and Lee’s Scaramanga is one of the series’ most interesting villains. Maud Adams is given a good character to work from, her Andrea Anders is intriguing and very much a live wire in the plot, it’s a good performance that would see Adams rewarded with the lead lady role in Octopussy (1983). Villechaize’s Nick Nack, Scaramanga’s right hand man/helper is a unique villain, though this is spoilt somewhat by a daft final confrontation with Bond. There’s a brilliant car stunt performed by Bumps Willard, done in one take, it alone deserved to be in a better film.

Elsewhere. Barry is back on musical score duties, providing an Oriental tinted arrangement. Sadly Lulu’s title theme song is instantly forgettable and lyrically feels like it was written in 5 minutes. Locations are sumptuous, with Macau, Hong Kong and Thailand put to great use by the team, and the gadgetry is kept to minimum which allows us to enjoy the one or two inventive modes of transport used within the piece. The box office was $98 million, a considerable take for sure but still some $63 million down on the previous Bond adventure. With critics and fans considering the film a let down, questions were again raised as to if Bond was loosing his appeal? With Saltzman, Hamilton and Mankiewicz bowing out of the franchise, would there be a turnaround in Bond’s fortunes? Would Moore finally get a script and film to test him? 6.5/10

The First Bond Movie I Saw,
I saw this in the Regal cinema in Rothesay in 1975 and can remember not being too taken by it. Maybe that explains why I’m not a great Bond fan. Having familiarised myself with the Bond series in later life it’s easy to see that THE MAN WITH THE GOLDEN GUN is one of the poorest Bond films, Moore makes a weak Bond.

Britt Ekland plays a bimboesque Bond girl, the script is silly AND boring and Guy Hamilton doesn’t come close to the heights he reached in GOLDFINGER. I really get the impression that the film would have been so much better if the producers had stuck to the book and had Sean Connery back.

As a side note the Regal cinema closed in 1976, was knocked down in the mid 90s and a housing development was built in its place