The Legend of Lizzie Borden 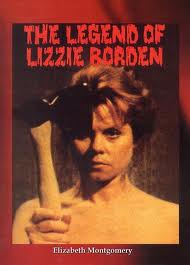 One of the all time best TV dramas,

This was based on the infamous killings in Fall River MA in the 1880s. Lizzie Borden was arrested after her father and stepmother were found dead–killed with an axe. She was found not guilty–but the suspicion stuck with her and she was an outcast to her dying day.

This movie shows us how she did it IF she had. The movie takes great liberties with the facts–Borden was 16 when her parents were killed. In the movie she was played by Elizabeth Montgomery who was in her 30s or 40s at that time. I usually hate playing fast and loose with the facts but Montgomery was GREAT! An Emmy winning performance if I ever saw one. Also, for its time, it was pretty graphic. You don’t see the killings, just hear them, but there is a shot of Montgomery (or her double) standing totally nude over her dead stepmother. Only a back view was shown but that was pretty extreme for 1975 TV. In fact ABC got so many complaints that some affiliates refused to show in when they ran it again.

Still it was a well-done, fast moving movie with Montgomery just perfect in the title role. Try to see it uncut–a local TV station here showed it years ago edited! One of the best TV movies of all time.