The Legend Of Hell House

The Legend Of Hell House -1973
For the sake of your sanity, pray it isn’t true! 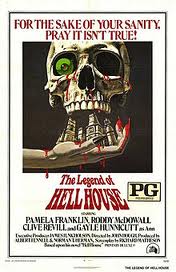 Flawed But Memorable,
All roads lead to Rome–or in the case of haunted house stories to Shirley Jackson’s THE HAUNTING OF HILL HOUSE. Published in 1959 and then memorably filmed by Robert Wise with Julie Harris in 1963, both book and film have exerted a powerful influence over the years, and this was particularly true where author Richard Matheson was concerned: although he added a number of original ideas and created a memorable chiller, his popular novel HELL HOUSE was so similar to the Jackson blueprint that it is a wonder her estate did not contemplate legal action.

The novel’s film version, THE LEGEND OF HELL HOUSE, inevitably suffers in the comparison to both Jackson’s novel and its own film version. But while it is not a great film, it is a very good one–and it has a number of assets that ghost story connoisseurs will relish. As in Jackson’s story, the plot concerns four individuals sent to investigate a house of very unsavory reputation: two men and two women. Here the expedition is led by a skeptic, Dr. Barrett (Clive Revill), who believes that “hauntings” are manifestations of residual energy rather than of surviving personalities–and who considers the Belasco house an ideal opportunity to put his theory to a practical test.

He is accompanied by his wife Ann (Gayle Hunnicutt) and two mediums: Benjamin Fischer (Roddy McDowall), who has the distinction of being one of the few individuals to have previously visited Belasco House and lived to tell about it, and Christian spiritualist Florence Tanner (Pamela Franklin), who soon clashes with Dr. Barrett over his skepticism. And although Dr. Barrett has meticulously planned this investigation into Belasco House, from the moment the party enters the doors nothing turns out the way any of them expect.

The great thing about the film is Pamela Franklin, who was one of the most interesting actresses of the 1960s and early 1970s, first making her mark as a child in the memorable thriller THE INNOCENTS and then giving a devastating turn as one of her teacher’s pets in THE PRIME OF MISS JEAN BRODIE. While THE LEGEND OF HELL HOUSE is hardly on the same level as these other films, Franklin herself is–and she is quite extraordinary from start to finish. (It is a tremendous pity her career faltered not long after the release of this film.) McDowell also offers a memorable turn as Mr. Fischer, and Revill and Hunnicutt offer superior performances as well.

The fact that it was filmed on a low budget is actually an asset to the movie, for instead of elaborate set-ups the film emerges as visually lean and clean, relying on its performances to create a very effective mounting sense of unease. Where it falls down–and more than a little–is in the script, which was written by Matheson himself. There are too many loose ends here, and while in some hands this might result in a sense of mystery, here it gives the feeling of sloppiness. Perversely, it also suffers from a determination to explain away everything it can, and the result is often somewhat anti-climatic.

Due to Franklin’s performance and McDowell’s strong support, THE LEGEND OF HELL HOUSE will likely satisfy viewers who prefer their ghost stories strong on atmosphere and psychology. For all its flaws it is a memorable film, and well worth having.
httpV://youtu.be/_MDF9vZVd_s

One of the best haunted house films ever!
Four psychic investigators (Roddy McDowall, Pamela Franklin, Clive Revill, Gayle Hunnicutt) are to spend a week in the Mount Everest of haunted houses to see if life does exist after death. They are given only a week and, in that time, have all the ghosts attack full force.

Next to the 1962 version of “The Haunting” this is the best haunted house flick ever made. It starts up and never stops. There’s no humor and it’s beautifully atmospheric. Also creepy sound effects and eerie music help keep up the mood and director John Hough shoots the film from weird angles keeping you off balance. Good performances help especially by Franklin and there’s one harrowing sequence in which she “offers” herself to the spirits of the house. Not for the blood and guts crowd (this is PG rated). A very scary movie.

The book is much better and a LOT more graphic but there was no way they could have shot the book faithfully–it would have had an X rating! For instance when Franklin has sex with a ghost–in the movie she looks into the camera and screams. In the book she finds a rotting corpse forcing itself on her!

This seems to have disappeared off the radar–even the 2003 DVD release is pretty bad. The colors are faded, there’s only a trailer as an extra and there was no big publicity campaign for it. Still you should seek it out if you haven’t seen in–it’s worth it.