The House That Dripped Blood 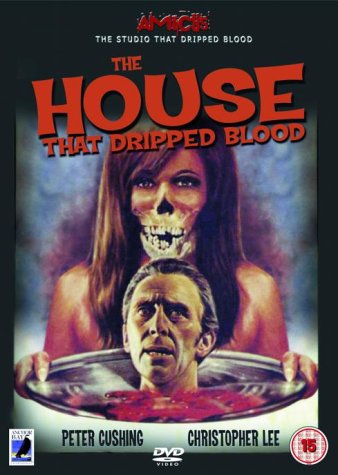 This film surely is the best Amicus production I’ve seen so far (even though I still have quite a few to check out). The House that Dripped Blood is a horror-omnibus…an anthology that contains four uncanny stories involving the tenants of a vicious, hellish house in the British countryside. A common mistake in productions like this is wasting too much energy on the wraparound story that connects the separate tales…Peter Duffel’s film wisely doesn’t pay too much attention to that. It simply handles about a Scotland Yard inspector who comes to the house to investigate the disappearance of the last tenant and like that, he learns about the bizarre events that took place there before. All four stories in this film are of high quality-level and together, they make a perfect wholesome. High expectations are allowed for this film, since it was entirely written by Robert Bloch! Yes, the same Bloch who wrote the novel that resulted in the brilliant horror milestone `Psycho’… We’re also marking Peter Duffel’s solid and very professional debut as a director.

The four stories – chapters if you will – in the House that Dripped Blood contain a good diversity in topics, but they’re (almost) equally chilling and eerie. Number one handles about a horror-author who comes to the house, along with his wife, in order to find inspiration for his new book. This starts out real well, but after a short while, his haunted and stalked by the villain of his own imagination. The idea in this tale isn’t exactly original…but it’s very suspenseful and the climax is rather surprising. The second story stars (Hammer) horror-legend Peter Cushing as a retired stockbroker. Still haunted by the image of an unreachable and long-lost love, he bumps into a wax statue that looks exactly like her. Cushing is a joy to observe as always and – even though the topic of Wax Museums isn’t new – this story looks overall fresh and innovating. This chapter also contains a couple of delightful shock-moments and there’s a constant tense atmosphere. It’s a terrific warm-up for what is arguably the BEST story: number 3. Another legendary actor in this one, as Christopher Lee gives away a flawless portrayal of a terrified father. He’s very severe and strict regarding his young daughter and he keeps her in isolation for the outside world. Not without reason, since the little girl shows a bizarre fascination for witchcraft and voodoo. Besides great acting by Lee and the remarkable performance of Chloe Franks as the spooky kid, this story also has a terrific gothic atmosphere! The devilish undertones in this story, along with the creepy sound effects of thunder, make this story a must for fans of authentic horror. The fourth and final story, in which a vain horror actor gets controlled by the vampire-cloak he wears, is slightly weaker then the others when it comes to tension and credibility, but that the overload of subtle humor more or less compensates that. There’s even a little room for parody in this story as the protagonist refers to co-star Christopher Lee in the Dracula series! Most memorable element in this last chapter is the presence of the gorgeous Ingrid Pitt! The cult-queen from `The Vampire Lovers’ certainly is one of the many highlights in the film…her cleavage in particular.
No doubt about it…The House that Dripped Blood will be greatly appreciated by classic horror fans. I truly believe that, with a bit of mood-settling preparations, this could actually be one of the few movies that’ll terrify you and leave a big impression. Intelligent and compelling horror like it should be! Highly recommended. One extra little remark, though: this film may not…repeat MAY NOT under any circumstances be confused with `The Dorm that Dripped Blood’. This latter one is a very irritating and lousy underground 80’s slasher that has got nothing in common with this film, except for the title it stole.

The House That Dripped Blood

Good horror anthology
Four stories written by Robert Bloch about various people who live in a beautiful, old mansion and what happens to them. The first has Denholm Elliott as a novelist who sees the killer he’s writing about come to life. Some spooky moments and the twist at the end was good. The second has Peter Cushing becoming obsessed with a wax figure resembling his dead wife. The third has Christopher Lee who has a child (Chloe Franks) and is scared of her. It all leads up to a pretty scary ending (although the ending in the story was MUCH worse). The last is an out and out comedy with Jon Petwee and Ingrid Pitt (both chewing the scenery) and a cape that turns people into vampires! There’s also a cute line about Christopher Lee playing Dracula.

This is a good horror anthology–nothing terrifying but the first one and the ending of the third gave me a few pleasurable little chills. Also the fourth one is actually very funny and Pitt makes a VERY sexy vampire! Also the house itself looks beautiful…and very creepy. It’s well-directed with some nice atmospheric touches. A very good and unusual movie score too. All in all a good little horror anthology well worth seeking out. Try to see it on DVD–the Lions Gate one looks fantastic with strong colours and great sound.