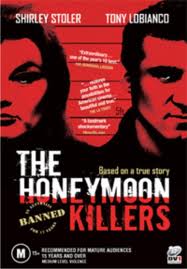 THIS has a cult following?

Movie based on real life killers Martha Beck (Shirley Stoler) and Raymond Fernandez (Tony LoBianco). Beck was a 200 pound nurse who met sleazy Fernandez through a lonely hearts correspondence. They met and fell in love. They then met rich old ladies through the correspondence, killed them and took their money.

I’ve seen this film multiple times over the years and its popularity totally escapes me. It does have some things going for it: it’s well-directed by Leonard Kastle; the one murder shown is actually quite frightening and Stoler and Lo Bianco give out good performances. Also Doris Roberts has a small early role here. Unfortunately the bad things far out number the good.

This was shot on no budget and it shows: the sets are really shabby (although that DOES fit the tone of the movie); all the characters are unpleasant; people scream rather than talk to each other; the dialogue is banal; Stoler and Lo Bianco aside the acting is terrible; the music is hilariously inappropriate; the attraction between Beck and Fernandez is never explained and, quite simply, this is boring! The movie just drones on and on and on. Critic Pauline Kael hated it too–she hit it on the head when she calls this “minimalist film-making”.

A dull, unpleasant and boring little film. I can’t recommend this to anyone.