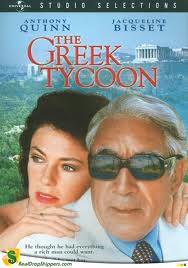 Thinly disguised story about the marriage of Jacqueline Kennedy and Aristotle Onassis. In this Anthony Quinn plays Theo Tomasis a Greek millionaire with some shady dealings. He meets Liz Cassidy (Jacqueline Bisset) and falls in love–but she’s married to President James Cassidy (James Franciscus). He’s killed and she goes to Onassis…you know the rest of the story.

This was a huge hit in 1978 but destroyed by the critics. I think they were angry because the filmmakers kept insisting this was NOT about Kennedy and Onassis (which it most certainly was). Facts were changed (Onassis had a daughter in real life, here it’s a son) and events but it was still pretty obvious. The characters themselves are treated very well. Bisset plays Cassidy as a beautiful, frightened, vulnerable yet strong woman. Quinn plays Tomasis as vulgar, stubborn but strong and learning how to love. Also Quinn has an infectious laugh and hams it up in an enjoyable way.

There’s also beautiful scenery and a wonderful score. These combined with the acting push this across. No cinematic masterpiece but a pretty good love story if you can ignore the Kennedy-Onassis connection. I give it a 7.