The Goodies and the Beanstalk 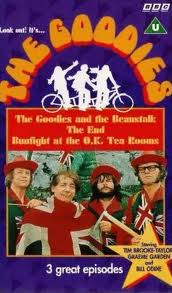 Somewhat Dated But Still Amusing,
I had given up on ever seeing an episode of THE GOODIES ever being broadcast on British network TV . Apparently much of their humour would today be classed ” racist ” and I have seen clips where the cast use variations of the N word which would no longer be allowed on British television nowadays so it was something of a shock to see Channel 5 broadcast THE GOODIES AND THE BEANSTALK at Christmas.

I was looking forward to watching this again and could recall seeing it as a child . To be honest though much of the humour has somewhat dated with a fairly long early sequence similar to THE BENNY HILL SHOW where there’s no dialogue, only a muzak soundtrack as the eponymous goodies try and make some money after falling on hard times . As with all the goodies sketches there’s a policeman involved and a scene that will have the PC brigade falling out of their chairs since it might be classed as ” homophobic ” .

There’s a sequence later featuring a competition involving puppies ” And remember if no one wins the puppies they’ll be sold to Indian restaurants ” and a sequence featuring a savage done up as Man Friday , but nothing that will cause great offence to someonewith a sense of humour.

The only criticism I have about the humour of THE GOODIES AND THE BEANSTALK is that it’s maybe a little too cartoonish and surreal for a modern day audience who think THE OFFICE and FRIENDS is the be all and end all of comedy . The goodies might have have been unsophisticated but they still remain amusing.

There is one other thing I noticed while watching this that might be classed as criticism and that’s the laughter track – It’s too intrusive . People complain about the canned laughter in things like I’M ALAN PARTRIDGE , LITTLE Britain but it’s just as bad here which goes to show it’s not a modern phenomena