The Golden Voyage of Sinbad

The Golden Voyage of Sinbad – 1973
Sinbad battles the creatures of legend in the miracle of Dynarama! 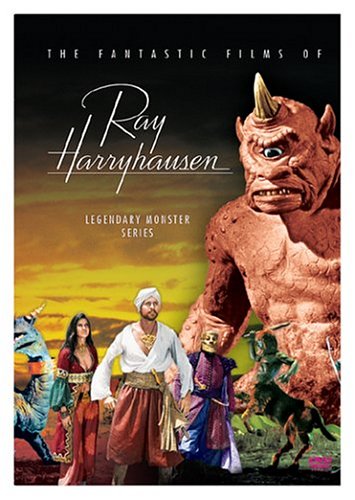 He who is patient obtains
The Golden Voyage of Sinbad is directed by Gordon Hessler and stars John Phillip Law (Sinbad), Tom Baker, Caroline Munro, Douglas Wilmer, Takis Emmanuel & Martin Shaw. It includes a score by composer Miklós Rózsa and features stop-motion effects from Ray Harryhausen (this one in Dynarama). It’s the second of three Sinbad films that Harryhausen made for Columbia, the others being The 7th Voyage of Sinbad (1958) and Sinbad and the Eye of the Tiger (1977). The plot sees legendary sailor Sinbad come into possession of a tablet dropped onto his ship by a mysterious flying creature. The tablet is one part of a map which greatly intrigues Sinbad so he wears it as an amulet. However, the tablet was bound for evil magician Koura (Baker) who now wants it back as it will lead to The Fountain Of Destiny. Can Sinbad, aided by the Grand Vizier Of Marabia (Wilmer), fend off Koura before he gets the rewards from the fountain to use for his evil ways?

A smooth adventure piece that’s low on plotting but high on magical mystery fervour. More known for directing horror films, Hessler does an admirable job in not letting the thin story bog the movie down. Sometimes with Harryhausen led movies the stop-motion creations end up being the sole reason for watching the film. And while, as always, they are the best thing in this movie, they give the film an Arabian Nights feel to the piece, managing to charm and engage enough to round it out as a full film viewing experience. Yes the cast are sub-standard B listers, with John Law and Munro featuring, one thinks, for looks (cool beard and turban look) and bosom (whoosh!) respectively. While Tom Baker’s pantomime villain act could never become tiring; such is the fun he and the audience are having with it. But this be a good old yarn that’s spun well in conjunction with Harryhausen’s effects. Here we are treated to a vengeful ships Figurehead, a Centaur, a winged Griffin, a tiny Gargoyle and best of the bunch-the goddess Kali, a six armed statue that is brought to life by Koura. The latter giving a moment to rival that of Talos’ awakening in Jason & The Argonauts. Look out for Robert Shaw who features uncredited as the “Oracle Of All Knowledge”. Rózsa adds the aural joy with mystical Arabian flavours, and Ted Moore’s cinematography brings the gorgeous colours and costumes to life.

Probably Harryhausen’s Least Impressive Effort,
Ray Harryhausen is a special FX god who knocks todays CGI wizards into a corked hat . Compare the skeleton scenes of JASON AND THE ARGONAUTS with many of today’s movies and tell me what effect is more convincing ? No contest is it ?

Unfortunately the problem with THE GOLDEN VOYAGE OF SINBAD is that the audience is sitting there waiting for some great stop frame animation to come along and the film drags its feet in this respect . Twenty five minutes into the running time and there’s only one small sequence featuring the Harryhausen effect , instead the audience have to put up with a bunch of not unknown British television actors standing around talking . The stop frame animation sequences do eventually come but how many children would have been bored senseless by this time ?

Watching THE GOLDEN VOYAGE OF SINBAD today is of interest for only two reasons . One is that the heroes are obviously Muslim which you probably won’t be seeing in too many movies these days while the other is that the producer of DOCTOR WHO at the time Barry Letts decided to cast Tom baker in the title role after seeing him in this movie.