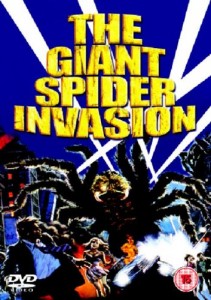 The Giant Spider Invasion is not a bad movie….it’s a terrible movie. Easily one of the worst movies ever made which makes it quite enjoyable again…it’s a strange theory but I didn’t invent it. All elements in this movie are so far below the standards that the whole finished project becomes hilarious. You’re not laughing with this movie…you’re roaring with laughter AT this movie. The Giant Spider Invasion was never meant to be a comedy…on the contrary, it was meant as a breath-taking monster film that would scare the hell out of people. This movie was made in 1975, when the sub-genre of “eco-horror” was making it’s comeback. During the fifties this was the most popular sub-genre and the first director who came up with the scare idea of a huge spider was Jack Arnold ( Tarantula ) … Director Billy Rebane saw his chance to do something similar and he even figured out a way to keep his production cheap!!

The Giant Spider Invasion could easily be renamed to “the disguised Volkswagen attack” because the huge spiders are in fact VW Beetle’s covered with sheets and legs. The headlights function as eyes. Not a bad idea you’d think ( and maybe it isn’t ) but it’s executed very very poorly… The spiders aren’t moving, the are in fact DRIVING !! And every time they’re on the screen some stupid tune can be heard in order not to notice the running engine. Great idea, Mr. Rebane…

Don’t think that’s the only goof in The Giant Spider Invasion…The acting is very laughable ( especially the Sheriff and the waitress are *cough cough* multi-talented ), the other effects are a joke ( that meteor hitting earth !! ) , there’s no attempt to build up tension or even atmosphere and the musical score is pathetic ( example: while a couple has an argument they’re running around a kitchen table. Meanwhile a stupid banjo tune is played … cliché ). Better yet, there’s a complete lack of structure during the whole movie…at first, it seems like you’ll follow the adventures of a married couple but all of sudden they die, then you think a young girl and boy are the leading actors but they completely disappear and they’re ain’t mentioned again. Oh and by the way…did you know that a falling meteor opens doorways to another dimension ?? Neither did I. The ending is terribly forced and we’re supposed to believe their solution worked while you don’t see ONE spider die…Yeah sure, why not.

The Giant Spider Invasion is pure trash !! No wait, trash can be good sometimes…it’s pure CRAP !! But, for that exact same reason it received a huge cult-status and the movie was very popular especially in drive-in theaters…oh, sweet irony. Giant mutated animal flicks are fun, fascinating and even terrifying from time to time ( Them! ) but this thing is nothing but a bowl of rotten cheese…One to watch if you have a weird sense of humour…NEXT!!