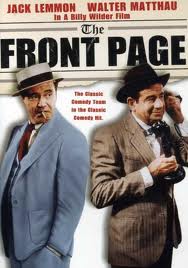 Not bad but a disappointment,

In 1920s Chicago Hildy Johnson (Jack Lemmon), a reporter, wants to leave the newspaper business and get married (to Susan Sarandon). His editor Walter Burns (Walter Matthau) is dead set against it and will do anything to get Hildy to stay. And then there’s the execution of Earl Williams (Austin Pendleton) coming up…

Elaborate, star-studded and very good-looking movie. It did keep me entertained BUT it’s a very bad adaptation of “The Front Page”. The original was filled with quick, very funny dialogue to be delivered at lightning speed. This movie “updates” the dialogue (that means throwing in swearing), adds some really crude jokes and throws in unnecessary slapstick sequences. As some other posters have mentioned this movie is VERY loud–too loud. The cast does what they can–Matthau is horrible but doesn’t destroy the movie; Lemmon, although too old for the role, is just great; Sarandon is shamefully wasted (but she was unknown when she did this); Carol Burnett is (surprisingly) not that good as a prostitute (yes–you read that right–Carol Burnett plays a prostitute); Austin Pendleton is letter-perfect as Earl Williams; Vincent Gardenia explodes and yells (a lot) as the sheriff and Harold Gould (wisely) underplays the part of the mayor.

So this is a good movie but too loud and crude. And it’s a real travesty if you compare it to “His Girl Friday”. See it for the cast and the great sets.