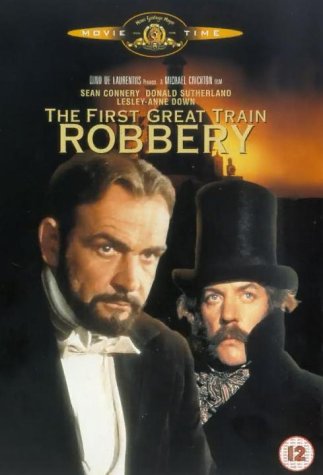 If you’ve turned nose on me I’ll see you in Lavender.
The First Great Train Robbery is directed by Michael Crichton who also writes the screenplay. It stars Sean Connery, Donald Sutherland, Lesley-Anne Down, Wayne Sleep, Robert Lang, Alan Webb and Andre Morell. Music is scored by Jerry Goldsmith and cinematography by Geoffrey Unsworth. The story is loosely based on the real Great Gold Robbery of 1855, where a rogue criminal named William Pierce and his cohorts executed the theft of £12,000 in gold from a speeding train on route to aid the British Army during the Crimean War.

A delightful period caper picture that’s high on production value and fun characterisations. Split into two halves, Crichton’s movie makes light of the actual crime to portray Connery and co as lovable rogues, thus hooking the viewer in to actually root for them to pull off the intricate crime. First half (well it’s more two thirds of the film to be exact) details how the robbers obtained the four keys needed to get into the safe. Harder than it sounds since they are in different locations to one and other and guarded over by different officials. Naturally there are scrapes, skirmishes and obstacles to overcome during this complex operation, and no short amount of humour and tension either. Then it’s on to the actual crime, which buzzes ferociously with derring do and ingenious cheek! It may have been loaded with chitter chatter and much bluffing of the way leading up to it, but the pay off is excellent and not without genuine excitement as Connery’s (doing his own stunt work) Pierce and Sutherland’s safe cracking Agar pull off the seemingly impossible.

Benefiting the film greatly is Crichton’s attention to detail, where he thrives on the Victorian England setting. From the streets, the costumes, the dialogue and mannerisms of the characters, they all fit nicely within the narrative. Helps, too, that the cast are playing it with tongue in cheek, Connery and Sutherland are revelling in playing roguish dandies, splendidly attired facially with quality face fuzz and Down raises the temperature of Connery and male audience members alike. Probably her best ever performance, Crichton writes a good role for Down that sees her not only as a sexy head turner (it’s unlikely that Victorian underwear has ever looked this sexy before in film), but also as an observant member of the gang; one who isn’t too shabby on the disguise front either. Dancer Wayne Sleep is nicely cast as a fleet footed housebreaker, while Lang, Webb, Morell and Michael Elphick pitch their respective performances just right. Goldsmith’s score is energetic and Unsworth’s (his last film as he sadly passed away shortly after shooting it) photography is a lesson in quality without trickery.

Fanciful and tame if compared to the big budgeted actioners of today, The First Great Train Robbery none the less is testament that simplicity of plot and a keenness to entertain is sometimes all you need. 8/10