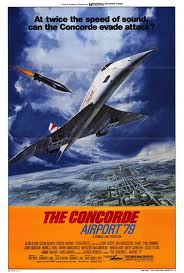 Bottom of the barrel here folks!,
The last of the “Airport” sequels. This has Alain Delon and George Kennedy (who was in all the Airport movies) as pilots; David Warner (!!!) as the radio engineer; Susan Blakely as a newswoman targeted for death; Robert Wagner as a brilliant scientist (stop laughing!); Eddie Albert as a president of the airlines; Charo in a dreadful “comical” bit; John Davidson as a newsman (love how his hair stays in place even AFTER the plane turns upside down!); poor Martha Raye is humiliated; Cicely Tyson plays a mother who is flying a heart for her dying son (stop rolling your eyes!); Jimmie Walker as a clarinet player (what did I say about not laughing?); Mercedes McCambridge as a Russian gymnastics coach (OK you can laugh at that one); Bibi Andresson as a hooker and Sylvia Kristel and Sybil Danning as love interests.

Just pathetic. Full of stupid plots and dialogue that will have you roaring–watch for Davidson getting “married” on the plane near the end! The Concorde is taking all these people to Russia. They’re attacked with missiles, escape, land safely in France and TAKE OFF AGAIN the very next day!!!! Don’t you think the flight would have been cancelled or something? Most of the acting is terrible–McCambridge is a sight to behold in a red fright wig and a horrible fake accent. The only good acting is from Kennedy and Delon (looking fantastic) who gives a very engaging performance. Still that’s not enough to make you sit through this drivel. Too long and lousy special effects too. This was a mega-bomb and (thankfully) stopped Universal from doing anymore.