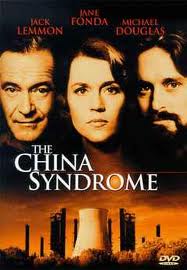 TV newscaster Kimberly Wells (Jane Fonda) and her radical camerman Richard Adams (Michael Douglas) are at a nuclear power plant when a serious accident happens. The plants managers play it down but Adams has filmed it all. Wells and Adams try to get it on the air but the corporation that runs the plant prevents it. Plant executive Jack Godell (Jack Lemmon) realizes there are serious problems and tests have been falsified. He tries to get executives to believe him–only they know it. Wells, Adams and Godell find all their lives are in danger.

I saw this in a movie theatre in 1979. I was only 17 and it scared me silly. To make matters worse the Three Mile Island accident happened around this time making the movie all that more real. Seeing it over 20 years later it doesn’t scare me but it still is an excellent film–it works as a mystery, a gripping drama and an expose on the nuclear power industry. Fonda (with red hair) has one of her best roles as Wells–she perfectly conveys her character’s growing suspicion and horror when she realizes a nuclear disaster could happen. Lemmon is (as always) excellent. He starts out believing in his company and the job and slowly starts to unravel when he starts finding things out. He was rightfully nominated for an Academy Award for this. Douglas is good but he has a small part and is completely overshadowed by Lemmon and Fonda.

A really great film–one of the best of the 70s. Don’t miss this one!