The Cheap Detective – 1978
He knows every cheap trick, cheap joke, cheap shot and cheap dame in the book. 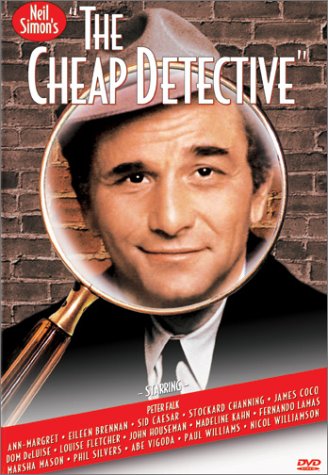 Murder By Death, Part Two,
Following close on the heels of “Murder By Death,” screenwriter Neil Simon penned this, another mystery farce focusing this time on a character originally developed in “Murder By Death,” Peter Falk’s trenchcoat-wearing Humphrey Bogart impersonation. The result is an often funny though somewhat strained and oddly miscast production.

Falk’s Lou Peckinpaugh is investigating the murder of his detective partner in Nazi-occupied San Francisco. The cops think Peckinpaugh did it, because he was having an affair with his partner’s wife. Some people want him to recover some stolen diamonds disguised as Albanian eggs. Meanwhile, to add some “Casablanca” to this “Maltese” parody, Lou’s old flame has arrived in San Francisco with her husband, a Resistance leader who wants to open a two-star French restaurant in Oakland – if the Gestapo doesn’t get him first.

It’s a kindred spirit to “Airplane,” a film made two years later. This is a madcap, everything-but-the-kitchen-sink comedy that plays with movie conventions to absurd lengths. Simon’s roots as a writer on TV’s “Your Show Of Shows” are very clear here, not only with the presence of that show’s star, Sid Caesar, in a key role, but in the way Simon creates an all-out comedy in the vein of two fellow “Show Of Shows” writers, Mel Brooks and Woody Allen. It’s even more goofy than “Murder By Death.” “Cheap Detective” has a lot of laugh-out-loud moments, but it’s not as well-thought-out or fun as “Murder By Death.” There’s a dumb beginning, with underinspired opening credits and a drawn out joke about a killer who works so fast the victims haven’t time to fall. The film also peters out at the conclusion, unlike “Murder By Death,” where much of the charm comes with the kooky finale.

But the middle is mostly very good. Even great spoofs like “Airplane” and “Young Frankenstein” have dumb jokes. “Cheap Detective” has them, too, along with some hilarious moments. Simon throws up a ton of non sequiturs and silly puns, much in the vein of Brooks and Allen in their early, better days. Since this film doesn’t have the same level of cultural recognition as the best of Brooks, Allen, or Simon, there’s more chance of being pleasantly surprised by what takes place here. Peter Falk is great in his Bogie reprise, and so is Eileen Brennan playing the same Lauren Bacall character she created in “Murder By Death.” Madeline Kahn is super, too, though I can’t tell you the name of the character she plays and neither does she.

But there are some weird casting choices. John Houseman as fat Sydney Greenstreet? Dom DeLuise as Peter Lorre? Paul Williams? Abe Vigoda? I guess Marsha Mason had a role guaranteed in her prenup with Mr. Simon, but she’s not quite right as a femme fatale. Neither is Louise Fletcher as the Ingrid Bergman character. Everyone in the film talks about her being such a knockout, but all I see is Nurse Ratched. No one is really bad, just square pegs in round holes. The weirdest is Phil Silvers, who isn’t even in the film except as a meaningless half-second cameo at the end, yet he has an opening credit.

Two standouts are Nicol Williamson as the Nazi “military attache to Cincinnati” and Ann-Margret as a cleavage-flashing vamp. Whenever they are on screen, the movie is a lot funnier. Falk mostly serves the plot, but has some good lines, too: “Day by day, I erased your face from my memory, until all I had left was your right ear and three front teeth on the bottom.” The film will make you laugh, and laugh again if you give it a few months to recharge between viewings.

It’s not a classic comedy, or even very good, but it’s a fun frolic from one of filmdom’s finest funnymen.